Mr. Mills, it’s been said that one day your music will be used to communicate with a higher alien life form. Is that something you can imagine?

(Laughs) It would be nice but I don’t think so! A lot of the music that I make is really kind of rooted in tribal beats and African rhythms, so… No, I would imagine that someone else would come along and find a new way to use electronic music to communicate far, far, far beyond what I could ever do.

I find that hard to believe. You founded the first techno label in the 1980s and you are one of the most important figures in electronic music today — it seems like you’d be the perfect person for the job.

It’s not in my psychological make up! I have much less of a chance to create something that would be used very far in the future because I’m limited by where and when I was born. I grew up in the soul era in Detroit, so I’m still very much influenced by that and by the Civil Rights Movement and by James Brown. I can’t shake disco, I can’t shake Larry Levan and Paradise Garage and Studio 54. That’s in my DNA! I remember how turbulent the sixties and seventies were in the United States. That’s what keeps me on this constant path of looking forward, because looking back is often very disappointing. I have a certain distrust because of the way America is, and because I continue to see how it’s becoming.

“A DJ who is working with music to say something to people is quite rare in this industry. There’s no Bob Dylan in electronic music.”

Is it fair to say that techno has been a kind of escape from that reality?

I think that electronic music in the larger sense would and should be — it’s designed for that — but many musicians don’t really exercise that. They’re not releasing it for that. They’re using it in what seems to be the most limited way of transferring information: it’s just about dancing. I don’t see much effort to change that in the industry. I don’t see it from any angle. Today’s artists don’t take the opportunity to really explain themselves because they’re too much caught up in that whole process…

Right. Making meaningful music is not something that will get you on the cover of a magazine. The discussion doesn’t even get that far! It’s mainly about how many people are following you on the webpage or Facebook or whatever. A lot of producers, a lot of DJs, they’re not even duped! That is really the case in this industry. A DJ who is working with music to say something to people is quite rare in this industry — which is really strange. You know? There’s no Bob Dylan in electronic music.

Even though music has historically been a powerful tool for communication and protest.

Have you always known what you wanted to say with music?

No, it’s something that developed over time. Earlier in my career, in the late eighties and early nineties, I was very concerned about trying to reach a certain status. I was convinced that I had to be accepted by everyone. Eventually, I found that because of where I’m from, who I am, I wasn’t going to have the same chances as others, so I just decided that I wasn’t going to waste any more time working on things that I wanted. I left that horse race to them and started to work on things that I thought were more important, that would speak to my audience on another level. And I started with cinema. 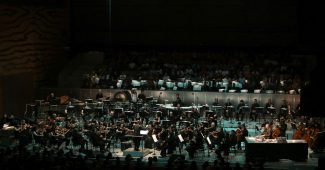 When you started creating new film soundtracks and performing them live?

Right. Around the year 2000, I used the electronic music genre to work on Fritz Lang’s Metropolis and tried to address a subject that unfortunately seems to be timeless: how people themselves have to find a way to come together in order to be able to solve greater problems. I’ll be doing a live soundtrack to another Fritz Lang film, The Woman In The Moon, which, when it debuted, it was really the first time that the public had seen a graphic view of what the surface of the moon looked like. So working with this film now that we’re living in the space age, it’s interesting to have that comparison.

You once said, “There must always be destruction of the old to bring forth the new.” How do you reconcile that with putting new music under old films?

It gives the idea a new life! I don’t think too many people would disagree with that. It doesn’t compromise the original composition; that stays intact and informed, but the films I’m working with or have worked with in the past — Metropolis, The Trip, Woman In The Moon, Berlin: Symphony of a Metropolis — have very universal and very human ideas behind them, so to only expect to experience it in one way… It’s like saying that I should make only one version of my tracks “Gamma Player” or “Sonic Destroyer.” It just feels a bit unnatural, I think.

In that sense, the possibilities for your music are quite limitless. Is that somehow daunting for you?

No! You know, just about anything is possible if you can find the map or the blueprint to get there. When you’re working with sound and trying to make people realize a certain thing, creating is one part of it, but you also have to understand people and know how to kind of work on their imagination and work on their senses as well — whether that be through film or art or music. I think you’re only limited by your imagination.

Do you ever feel limited by your own imagination?

Yes. That’s something I’ve struggled with. I think most people that create for a living have to think about their limitations… So I think if you can extract that from your creative diet, you’re probably pretty lucky. I try to put that aside. Though, I never feel that I have to, that I have an obligation to come up with ideas. I’m lucky enough to be able to make music when I feel like it or to approach an idea when I think it’s the time. And if I don’t, then nothing happens.

I guess it goes back to what you were saying about many musicians today succumbing to industry pressure, rather than releasing music that means something.