Ms. Apfel, do you need to be fearless to be fashionable?

I never think of things like that, but I guess maybe you do. But why should I worry? The fashion police are not going to come and put me in jail! I love bright colors, but I never did anything that I did to be a rebel… I just did it because I thought it was fun and it was good for me. And as long as I didn’t offend my mother or my husband, what anybody else thinks is their problem, not mine!

Have you always had a passion for color?

I’m not a pastel person! Pastels make me nervous. I could never be like my mother because she never had a hair out of place! She got up in the morning and she looked like she just stepped out of a Chicago Coin band box. She was perfect all the time. And I’m not like that. Everybody would turn around to look at her but in a completely different way to me. My mother was much more disciplined in that fashion than I am. I just go with the flow! 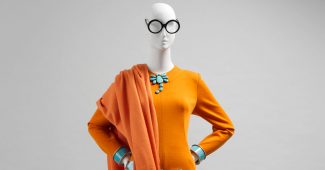 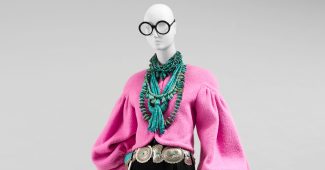 You seem to need a certain amount of spontaneity in your life.

Oh, absolutely! My God, I couldn’t live in a rigid world… If I knew what I was going to do every day, I would go nuts! Every day is different. I’m not a planner. You either do the right thing or the wrong thing, but you do it. I’m experimental, I’m curious, and I try things. And if I like it, I do it again!

So getting dressed never feels like work to you?

I have trouble picturing you in an old sweater and a pair of jeans.

I’ve never seen photos of you looking anything but fabulous.

Well, most people don’t want to see you looking grungy… I never look grungy, I always look clean! (Laughs) But even when I’m all dressed up, I like to be comfortable. If I’m not comfortable, I don’t want to wear it. I don’t pay attention to trends or anything. I was never one to hobble around in shoes because they were fashionable.

“You can’t learn style. Style, I think, is in your DNA. It's something inherent.”

Is that a problem in fashion these days? People wear things that are uncomfortable just because it’s in style?

Oh no. I think contemporary clothing is too comfortable! People take advantage and begin to look sloppy, nobody pays attention to what’s appropriate anymore. Appropriate seems to be a dirty word. Sweatpants are fine in their place but you don’t go to the theater in sweatpants. I think it’s disrespectful to the artists on stage! The theater is a kind of worshipping place. You go to worship good craftsmanship, good art, good food… If you go to a temple of cuisine, you should dress appropriately. If you come in looking like a pig with flip-flops and a dirty sweatshirt, I think it’s an affront!

What do you think is to blame for this decline?

It’s a whole breaking down of society, I’m sure you’ve noticed. The way people behave? The way they talk, the way they dress, the way they look? Everything! The dumbing down of society. Years ago you couldn’t enter a fine restaurant if you didn’t have a jacket! They’d have jackets on the door that they’d put on you. Everybody dressed up when they went to a restaurant. I like when I go to a restaurant and I look over at the next table and the people look attractive; it helps my digestion. When I see a beast with an open shirt and hairy chest hanging out it takes away my appetite! I think it’s just a lack of respect.

Respect for the people around you?

Lack of respect for yourself! I think if you go out, you don’t have to dress up all the time. I surely am not an advocate of that. But you have to look clean and neat and, you know, not look offensive. I think some of these people that waddle around Fifth Avenue in the summer, some of these ladies that have a butt from here to Poughkeepsie that wear tights or jeans that are so, so tight… It seems to me the more unattractive some of these people are, and the fatter they are, the less clothes they wear.

Do you miss the fashion scene of old New York?

I wouldn’t go into mourning over it, but there used to be an enormous fashion scene, and I don’t think there’s much of one anymore. If you walked down Fifth Avenue or Park Avenue in the fifties and sixties, everybody looked so wonderful. Now, if you’re clean and well-dressed you look like a freak. It was another world.

First of all, the clothes were clothes. They were properly made with beautiful fabrics. There were wonderful designers that knew how to cut and sew and drape. Back then in New York, we had some of the best designers going.

Do you remember things changing, for example, when America entered World War II?

Oh, of course they changed. Fashion was not on the forefront. The emphasis was not on making beautiful clothes. Factories changed, they made army clothes and stuff like that, people were in a somber mood. There wasn’t any fashion! Everything was simplified.

Because fabric was rationed during the war?

Right, it wasn’t until after the war that Dior came with the New Look. He made clothes with voluminous skirts because finally we had a surplus of fabric again. That’s what’s interesting if you really want to study fashion, it’s a photograph of daily life. The political climate, the economic climate, the social behavior—it’s all reflected in fashion.

What does today’s fashion say about our daily lives?

I think most people don’t know who they really are. They feel secure if they look like other people or if it’s the look that everybody says is in… People agonize about the way they look! It’s unbelievable! They don’t know what to wear or how to do it, and they’re very unhappy. But you can’t learn style. Style, I think, is in your DNA. You can learn how to be more fashionable, you can learn how to be better dressed, but I don’t think you can learn style. I think that’s something inherent. You have to know who you are first and then proceed from there—and that’s a lot of work! Most people don’t want to do it. And if they don’t want to do it, and they feel stressed by doing it, I always say it’s better to be happy than well-dressed.

Tavi Gevinson: “What is this exclusivity protecting?”