Mr. Archibong, in your opinion, are the objects and furniture you create as an industrial designer art?

I think so. From the beginning, I've seen what I do as art, and design as the medium. Just like some artists use paint, I use design. And part of the narrative of any piece of art that I'm making is the assumed function of that piece. So the fact that this is a table, that is part of the narrative of the piece of art. It’s not an artfully done table, it’s a table-fully done piece of art. (Laughs) You know what I mean? I come from a culture where all the stuff that we would call art is actually just called design. In a lot West African cultures, there’s no word for art: all the masks, all the statues, things like that are just functional pieces of design that have a spiritual purpose. They weren’t just frivolous art. The idea that something has to be useless in order to be art is something I reject.

So when someone is buying one of your pieces, does it feel to you like they are buying your art and displaying it in their home?

That's exactly right! Like, if you go to Flos, and you buy a lamp, and you put that in your home and somebody asks about it, you’re not necessarily going to be say, “Oh, this is the name of the lamp, it was made in this year, it was designed by this person.” Now somebody walks in your house and one of my chandeliers is hanging over your table, they're going to be like, “What is that?” And you'll say, “Yeah, I spent a lot of money on that, because it is a piece of art.” So I do see it as different, especially because my pieces each have a kind of a narrative along with them.

“I think the best thing that I’ve got going for me is that nobody can pin down exactly what I do. It gives me a lot of freedom.”

Your 2021 Pavilion of the African Diaspora is probably the best example of this within your work: it’s a beautiful piece of architecture with a deep narrative behind it, but it’s also functional as a space.

Exactly, yeah, it’s the same thing that I was saying about the tables and everything else. I don't plan to make rectangular spaces that are efficiently rectangular in order to execute specific functions, you know, I plan to make things on the architectural scale that have the ability to affect people on a deeper level. The same thing that applies to the making of a lamp… You can make a lamp and make it the most efficient lamp — or you could try to make a piece of art. And with the pavilion I was aiming to make a monumental architectural scale piece of art, that also had a functional aspect to it. It felt like the beginning of a phase in my career that everything else has been a set up for. Everything that I've been doing, everything that I've done is just a precursor to the architecture that I started off doing. It was the first time that I've gotten to the architectural scale on my own.

You studied architecture for a while, right?

I wanted to be an architect, so I was learning design skills. But I always thought I had something to say, and that I needed to say it through my art. When I was in school, there are certain things that didn't go well for me because I had this vision that not everybody understood. Back then, I think Marc Newson was the only designer who was with a major gallery and was selling weird pieces of furniture. Maybe there were others, but it wasn't as visible. And it wasn't something that you could say, “This is going to be my career path,” at least as much as you can now. So I feel I made some good decisions that set things up so that by the time we get to now, where collectible design is a thing, I can really do this. I think the best thing that I've got going for me is that nobody can pin down exactly what I do. It gives me a lot of freedom to try out different ideas.

Where do those ideas usually start? Do you conceptualize them in your head and then put things on paper?

To be honest, it's always different. I never know what I'm going to do when I get a new project! Sometimes I'm going to get a bunch of trace paper, I'll make a silhouette and then just go through variations until I hit something nice. Maybe we put those sketches up on the wall. Or maybe I'm going to print the full-scale silhouette of this thing, or I’ll do it in 3D modeling… And on and on. The thing that's consistent when I am in creation mode is that I have to be pretty particular about my schedule. I have to stay spiritually in tune. Exercise is really important for me because truth be told, I can have a lot of nervous energy that comes out at the beginning of any project, like, I have no idea how I'm gonna do this one! I don't know what the process is going to be for this one, I don't know how long it's gonna take.

The artist Rose Wylie says that she goes through real terror before starting a painting, but that the uncertainty is also a familiar place so she knows she can get through it.

You know, I was an athlete before, so for me, it’s like being in the locker room before the game. You're running through the plays, you know you’ve got everything but you’re nervous. It’s like, “Okay, I just need to get my energy up. I need to channel this nervousness into that max level of energy that allows you to do things that normally wouldn't be humanly possible.” The crazier the deadline and the more ambitious the project, the more nervous and more energized and the more excited I am to try to do it. 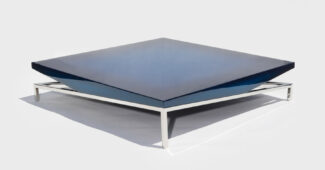 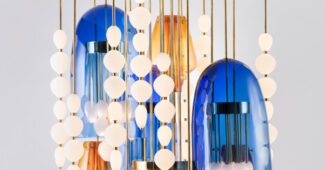 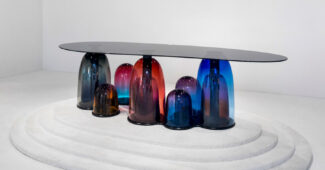 Does it help that you have so many different outlets to work within? Do you like that your creativity can be channeled into art or architecture one day, and furniture or lighting the next?

I don't know what it helps, or if it does help. I don't necessarily have any more outlets than anybody else has. I just choose not to give myself any kind of boundary. But yes, it is fun. I like it. It heightens and magnifies that nervousness that I mentioned. I’ve always had that mentality of if it’s fun, I'm going to do it. And if I was good at it, then I transferred those skills to the next thing that I would do. That’s just how my brain works, I connect different dots. In school, I had a great arts program, I learned Photoshop in the art studio, which was right next to the ceramic studio. So I would do some Photoshop, and then I'd go throw some pottery… I'm lucky that I got to try so many things. I’ve always thought that as far as creativity goes, there wasn't really a limit.

(Laughs) That comes across as arrogant now, but yeah, that’s always been my goal. Since that interview, I’ve done maybe 15 to 20 pieces of furniture and lighting, a couple solo gallery shows and museum acquisition… There's a lot of stuff that has happened. Anybody that came to the Pavilion or my shows, they felt something. The people that actually buy this stuff and live with it, they get the most out of it. I think most importantly, I can say pretty confidently that whoever is consuming these things is different afterward.