Radio Ballads is presented at Serpentine North from 31 March – 29 May 2022, and at Barking Town Square 2 – 17 April 2022.
Emerging Masters
Rolex is proud to support The Talks’ new interview series about the cultural leaders of the future.

Ms. Cammock, your multi-disciplinary art can include text, narration, poetry, spoken word performance, or singing. When was the first time that words had an impact on you?

There have been lots of moments. This is going back to when I was really small, but I remember my head teacher gave this assembly about Galileo, it was about this idea that you need to stand up for what you believe in. Like, if you believe the world is round, you need to stand up for that even if everyone around you thinks that's not the case. There’s something about finding your truth. And I think that really struck a chord! I mean, I was only nine, but it really has stayed with me my whole life. Then as I grew older, I really struggled to read, so I would listen to things instead.

What kind of things would you listen to?

I loved black female American writers; Maya Angelou, Toni Morrison, Alice Walker, they all spoke to me, and then I discovered Nina Simone. And that was it. She is my voice, whether she's speaking or whether she's singing… I can't even describe what she does to me, or for me.

You’re also a singer yourself, right?

Yes, we moved to Somerset when I was about 12 years old and I found myself completely isolated, feeling in many ways that my voice was diminished by nature of being a child who moved from London into the middle of the countryside. So I just started to write poetry, and then I taught myself to play on this toy guitar that we had. My mom eventually took me to a folk club, and then I started to perform and by age 15, I was performing around the clubs in the southwest. But that was really about my voice.

When did your interest in words and voices start to shift towards something deeper?

I guess I got older, you know, I went to university, and I became much more politicized. I was thinking more about voices generally and structurally, how they intersect and how they can be diminished, how they can be silenced, whose voices are elevated. By the time I got to the third year of my BA, I was making prints with these texts that sat alongside them. That’s when I realized that language and voice needed to be in there. I needed to have my voice in it somehow, because I had something I wanted to say. I created the first film that I ever made and there was no looking back.

Apparently when you eventually went to art school at the Royal College, one of your tutors gave you some advice to try and write something every day. That was a big turning point for you, wasn’t it?

Right, I went back as a mature student to art school, and I was advised to use my train journeys and commutes, or to just take time in the morning before work to sit down and write something. That was, I think, the beginnings of understanding what it meant to have a writing practice. And that I hadn't understood before. I would write poetry, I would write extracts, I would think about scripting, but I hadn't really thought about having writing as a practice. There's something about that — and regardless of whether I have a project going, I need to write something and I try to make myself write, because it's a skill and it's an art form. You need to keep going and keep being with it for things to come. And usually there's an idea or even a word that comes and it finds its way into the work. 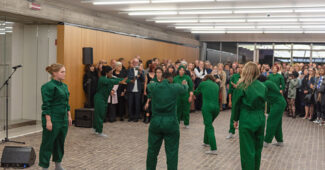 I think it depends. In performances, I move from spoken word to sung word very quickly, you know, I might be reading a bit of political text that then goes into philosophical texts, then I might sing a bit of poetry because it might be very difficult what’s being said… I feel that sometimes if I sing something really difficult to hear, it almost hits the sweetest sweet spot, because it comes out of me feeling very powerful. And I think it's received in a way that's very powerful. It’s about language finding its right form in that moment to say what it needs to say. That's the most powerful thing.

You also often use other people’s voices, words, and stories in your work.

I need to use other people's voices because actually, the singular voice is not what I'm interested in. Particularly, I'm interested in this idea of the weaving and the connections and the intersections between us. For example, with Radio Ballads, which is a project I’m working on with Serpentine, I'm interested in this idea of what the voice can do, the idea of the voice as a site of resistance. The project is a callback to a radio program that in its moment in the late sixties was quite innovative. Its programs would use anecdotal interviews, poetry, song and soundscapes from different sites where people work: fishing communities, miners, builders… Serpentine has asked four artists to do the same thing now, and make work based off this practice. I am working with social workers.

And the end result for your contribution will be a film?

Yes, I will be making a film which is in production right now. And there’s also some drawings made by social workers that will be on display. Those pieces have come out of the workshops we’ve been doing over the past two years: we’ve done body workshops, we've been thinking about gesture and the relationship to emotion, we've been thinking about what the voice does, the kind of shape the voice can take, whether it feels like an empowered voice or a quelled voice… The workshops, I suppose, are the work for me.

You had a similar experience several years ago when you won the Max Mara Art Prize for Women. You travelled around Italy to exchange stories with women all over the country, in the end producing one of your most celebrated works, Che Si Può Fare.

Yes, that was a six-month residency. I liked the voice and I was always interested in music and sound, so I chose to focus on lament and the female voice in Italy. I explored the women's movement that was particularly strong in Rome, I talked with some women about the struggles that they had in terms of feminism in Italy… I spoke with migrants who had left their families behind. I met a 92-year-old partisan fighter who talked about the war. I met a dancer who had had a car accident and never danced again… There were all kinds of incredible connections.

How did it feel to incorporate their stories into your art?

I think it's difficult, isn't it? Because it's really important to get the balance, to ensure you’re not exploiting someone. But I also think that there are many people in the world who have incredible stories, who have suffered incredible things, and nobody would ever know about it! I want to change that. I want to change whose stories are heard, and whose faces are seen. And I think it's important for the world that that happens, that we understand our communities more. We're complex. The world is complex. And if we only ever hear dominant narratives, we don't understand what's really happening anywhere in the world. So making this work, for me, is exciting. It makes me feel empowered.

Emerging Masters
Rolex is proud to support The Talks’ new interview series about the cultural leaders of the future.
Radio Ballads is presented at Serpentine North from 31 March – 29 May 2022, and at Barking Town Square 2 – 17 April 2022.
Life