Mr. Benson, as a photographer for over 50 years, how do you reconcile the fact that your pictures can't please everyone?

If people don’t like the pictures, I don’t care. To me, there’s only one point of view: that’s mine. You know, what the hell, I need to record what I see at that time! I’m not there to be the promoter. I’m terrible! (Laughs)

Is that why you also believe it’s essential to keep some distance from your subjects?

Right, when celebrities say, “Let’s have dinner tonight or tomorrow night,” I say, “That’s wonderful!” But I always cancel when I get home! It’s diminishing returns, it can only be bad what they’re going to say. I’m not going to carry their pictures any further because I’ve already taken them to possibly as far as I can take them or as far as they will go. I don’t want to be guided into some self-serving pictures that they want.

You must have a difficult time these days now that every celebrity has a team of publicists trying to protect them.

Oh absolutely, I think it’s awful. Publicists know how to dilute a good story. And they’re not doing their clients any good by saying, “You can’t do this, you can’t do that.” It’s terrible. If I find out a publicist is going, I tell them I am not doing it!

“I want a spontaneity from them, I want moving pictures.”

When I arrived at Michael Jackson’s house to photograph him, his publicist came out to introduce me to Michael, but he knew who I was because I had photographed him before. So Michael just told his publicist to go home! He understood. So, yes, I do make a point of not doing it if the publicists are going to be there because I know it’ll just be aggravating. I also don’t want them to come back on a photograph, and say, “Oh, that picture of me in a bubble bath, please don’t use it.” That’s what happens!

I never said what it was because Jack could call me a liar and say that was talcum powder! I let other people say what it was. I know what it was too, because I could hear sniffing sounds in his bathroom when I was just outside it. But that’s why I made a close-up! I wanted to show it. I really want to cover myself as well because I take that as evidence on a story that I am definitely going to repeat to my wife. I like the picture though, I like it very much. I liked him as well.

Well, people like the idea that somebody from a magazine is coming to photograph them, they like telling their friends … But there is a price to be paid for that! I want them to make themselves interesting, I don’t want them to be sitting on the couch all the time. What I’m doing is keeping their image alive.

How do you accomplish that?

I want a spontaneity from them, I want moving pictures. The thing about people is you have to get them to move and then they relax. If you leave them in a still position or sitting on a couch, you could watch rigor mortis set in. The brain stops functioning and yours stops as well. You’ve got to keep people moving. I want moving pictures, like James Brown doing the splits on my lawn! (Laughs) 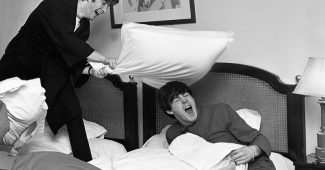 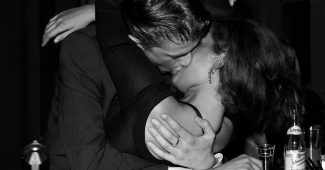 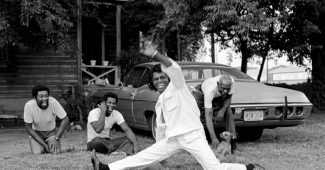 Does it also come down to being in the right place at the right time? You managed to capture the assassination of Robert Kennedy in 1968, for example…

That day was only a few years after the John F. Kennedy assassination in Dallas, and then suddenly there was another Kennedy who was dying and he was in front of me. I remember thinking, “This is it — I will never be right at the center of an assassination again.” I kept saying to myself, “This is for history, don’t mess up today, mess up tomorrow!” I had to be very conscious of my exposures, 15th, wide open, 30th, wide open… I knew that Bobby was gone, there was blood pouring out of his head — and that was somebody I knew and liked! But the screaming and the riot that was going on… I often wake up at night and I’ll go through it all.

You have nightmares about it?

I am often asked this question when I give lectures, “Don’t you have nightmares after it?” And I always say, “I would have had a nightmare if I hadn’t taken those photos.” I know I am the only photographer who’s ever covered an assassination from start to finish. I stayed and I was punched quite a few times but I couldn’t leave when they tried to throw me out. I’m pleased that I covered it. As photographers and photojournalists, we are covering something. This is what my business was.

“A good photograph to me is simple: what is in it, that’s all. Photographs don’t lie.”

Robert Polidori said that iconographical art is inherently more valuable than abstract or decorative art. I guess you would agree?

Right, I’m not interested in what fashion photographers do, for example, because they take the same picture all the time. It’s the same lighting, the same picture because basically they’ve got the best looking girl around and the best looking clothes. Richard Avedon, for example, knew every inch of his studio and what to do. He liked to show off in front of the pretty girls —he was a little guy, with his arms waving and all that. Surely a piece of shit. (Laughs) I mean, I could have gone into fashion a good few years ago but all I would have now are pictures of girls in pretty dresses.

And probably a bit more money.

(Laughs) More money, that’s true but I prefer the road I took. Much more. You photograph what you see, and I talk through my photographs. That’s what happened, that’s what they were wearing. That’s the thing about photography — writers can come in days later and say that they were there from the beginning, which is a lie! And they do it all the time. Photographs can’t do that, photographs don’t lie.