Mr. Obrist, you are an art curator, a critic, a historian, an author, and the artistic director at Serpentine Galleries. Where do you find the time to do all this work?

(Laughs) It’s not that the work gets faster or easier over time. It still takes a lot of time to do all this work, but I’ve come up with certain systems. One big change in my way of working came around 10 years ago: I realised that I wanted to work with a night producer. There are people who don’t want to work during the day, so to liberate someone from working during daytime, I would hire them to work with me at night. During the day, I have interviews, scholarly things, team meetings, meetings outside the gallery… At night, I then do correspondence for my books, or I’ll do research, or I produce and continue to work with my night producer. This routine is a great excuse to leave dinners and parties early, as I still have to work.

What is the curfew you give yourself?

There are only very few exceptions, but I basically almost never go home past 11:00pm. I go to sleep around midnight and my night producer continues to work, so when I wake up at 6.00am the next morning, a lot of things are already done, and I can just continue.

“I was always wondering how we could actually create ways of longue durée, to invent new ways of working that last.”

It sounds like those systems for sustaining a long-term routine are integral to not only the success of your work, but also your sanity.

We live in a world of short termism, events and deadlines. And I think it's really important in terms of the current moment that we can find ways to have longer durations… The question is how to think long term. That is something which has always interested me from the beginning. Initially in the nineties, I was a freelance curator and then I started to work for museums. I was always wondering how, within these rhythms of shows and events, we could actually create ways of longue durée, to invent new ways of working that last and are sustainable over a long period of time.

I started a project in 1993 called Do It. We thought it would be great to do an exhibition with instructions, and recipes, and how-to manuals. People could then interpret those all over the world. You could play the exhibition differently wherever it was shownwith local ingredients and elements, and even local artists. It was, in a way, the most sustainable type of exhibition because everything would be locally sourced and adapted again and again. The show has now happened 169 times. That show never stops, it gets transformed and travels, because it happens in this DIY way, locally. I think it’s interesting and relevant to the current moment, or over the last couple of years, particularly during lockdown.

How did the pandemic and the worldwide lockdowns impact your way of working?

Well, already prior to the pandemic, I started to reduce my travels, I favoured longer trips. But then with the pandemic and everything getting locked down, I realized that I couldn’t really function without studio visits. I would organise them on Zoom, it was the only way. As a result, I ended up doing more studio visits during the last three years. I visited studios outside big cities or in the countryside — places that I wouldn’t normally have the opportunity to go to. I think one of the big discussions right now is the question of decentralisation, even in the sense of how it worked with my studio visits. 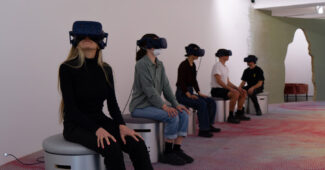 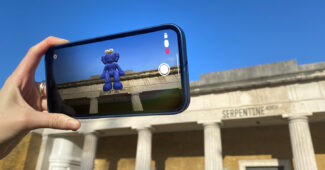 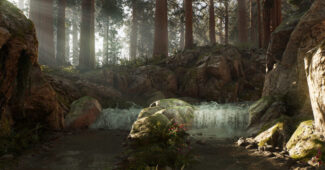 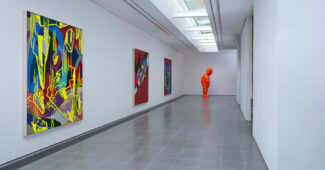 There’s also been a big change in how we view and interact with art: a lot of museums moved to online exhibitions, there was a rise in digital art and NFTs… Would that have happened this fast without the pandemic?

It’s not an either/or scenario — because already before this, art galleries and museums were a mixed reality environment; more and more, in exhibitions you had a physical component and a digital component. Three years ago, Junya Ishigami’s Pavilion was presented at Serpentine, but also a digital video with augmented reality accompanied the project. We worked with artist Jakob Kudsk Steensen, David Adjaye, and Google on an AR Pavilion. A few months ago, we had a talk with Alex Israel and Evan Spiegel from Snapchat about the future of augmented reality. In the parks, walking tours with an app are available. We had a selfie exhibition of Cao Fei’s work, we worked with Acute Art on a time travel exhibition… Of course, the lockdowns accelerated this but the idea of a mixed reality future was in our projects for some time.

What else does this mean for the future of the art world?

The possibilities offered by art and technology are endless. In the future we might even see artists inventing their own video games, or musicians doing concerts or festivals inside a game space. But what this also means is that the art institution has to change. New departments need to be created. At Serpentine, we actually created a technology department which works on such experiments.

This evolution into digital of art also results in its democratization. Is that exciting for you as well?

Recently we did a project with the artist KAWS, Acute and the video game Fortnite — a physical exhibition by KAWS was presented in the gallery, and a virtual replica of Serpentine was featured on Fortnite. The exhibition was probably seen by 100 million people, including players who were as young as 12 years old and had probably never been to a contemporary art space before. Many of those people ended up eventually coming to our gallery for the first time to see the exhibition in real life.

The pairing of an art institution, an artist and a video game would have still been unthinkable 10 years ago.

It’s always been the role of the curator to build bridges, to bring people together who otherwise wouldn't come together: artists, poets, architects… It’s my job to bridge those gaps as well. Two years ago, we did a project with the K-pop band BTS and the Danish artist Jakob Kudsk Steensen, which was an immersive digital forest, a virtual ecosystem… Contemporary art and K-pop merged, which wouldn’t usually interact, coming together. Another one of my rituals every morning, is to do one or two cyber introductions a day, where I introduce one or two people I know whom I think should meet. It may be one of the most productive things I do all day long. Sometimes it leads to a new collaboration, sometimes a new company’s grown out of it, sometimes anew artwork, sometimes a book, and sometimes it's just a coffee, sometimes nothing.

“It’s such a privilege to invent new rules with artists. That's something we cultivate as curators: somebody who will grow with the artists.”

It’s kind of your way of giving back to the community.

I believe in generosity as a medium. I want to share everything, always. If I meet somebody who is really exciting, if I have a great encounter, I want to share that because these connections are important. I've always thought that my job is to think about togetherness. I facilitate these introductions all the time, but also people do it to me all the time! For example, I have these different ongoing projects to protest against forgetting. I visit artists who just haven't had the visibility they deserve for their work, and that can make a huge difference.

Sudanese painter, Kamala Ibrahim Ishaq is a co-founder of the Crystalist conceptual art group in Khartoum. She does these extraordinary works, really going beyond boundaries, these incredible portraits of women and the cosmos. We ended up setting up a Zoom with her. Our curatorial team went to meet her and more will be announced in the coming months.

To be open, yes, but also to be willing to advocate for these artists you believe in.

As we work closely with artists, it's such a privilege to think of answers and to invent new rules with artists. That's something we cultivate as curators: somebody who will listen to the artists and then grow with the artists. How can an exhibition come up with new rules of the game, how can we make a transformative exhibition? It transforms you, but it also transforms the institution and the viewer. It can also really be a transformative experience for everybody who works on it.