Mr. Sorayama, you are best known for your sleek depictions of robots and machines. Would you call your interest in machines a fetish?

I’m not sure of the reason, but I have been fascinated with the light that reflects off metal and the structural beauty of mobile machinery ever since I was a child. People with real fetishes are people who don’t fear a criminal offence. I’m unable to cross that line due to a sense of sociality. That conflict is always there. I’m merely a proficient veteran at playing in my own fantasy world, without letting anyone know it’s a real fetish.

Do you think that overall, some kind of infatuation is essential to making good art?

I think so. Otherwise, we wouldn’t be able to continue doing it! No matter how the world changes, my interest in bodies and metals will not be affected.

Can the line between interest and obsession ever become blurred for you?

Actually, because of the pandemic, I started spending more time alone in the studio immersing myself in creating, and there was a point where I lost sight of the boundaries and felt scared. Despite how I may come across, I actually have a huge sense of sociality. Drawing is simply a fantasy. For example, it’s impossible to draw transparent air, however by using light you can make it appear as such. Fans of my work know that I always include such tricks in them.

“I watched as the metal was cut, its reflection spiralling, coiling like living creature. Looking back on that now, I think that is very much so connected to my present as an artist.”

Like how your drawings have the appearance of polished metal, for example?

I’m not drawing a robot. I’m drawing a creature clad in metal skin. I’m merely drawing a fantasy of metal that has elastic flesh and skin, just like us. But I’ve published several books that showcase my drawing, so anyone who really wants to know about my illustration and creative process can buy a copy.

Can you recall where that fantasy began for you?

There was a small, nameless factory in the town in which I grew up that I passed by on my way to and from school. My dad was a carpenter, but I much preferred metal to wood. I watched as the metal was cut, its reflection spiralling, coiling like living creature. Looking back on that now, I think that is very much so connected to my present as an artist.

The way you describe it sounds almost sensual.

I just draw the subjects that I like, based on my aesthetic, for myself. How my art work is interpreted is up to everyone else, so it can be distorted however one likes. I don’t have an answer myself! I’ll leave that up to the critic’s imagination.

Is it ever frustrating for you when your work is interpreted a certain way? Your art has even been banned on social media…

Due to the content of my drawings, it’s actually more than 80% of them that are banned on social media! However there are some that slip through the cracks and cause a commotion. I create by playing in the freedom of my imagination. No matter what the people around me say, creating is my freedom, my enjoyment of life, my energy. 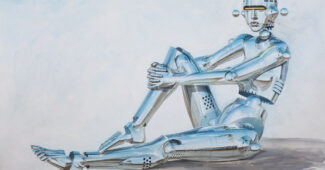 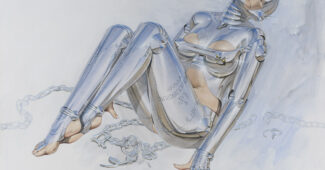 At the same time, your work has also infiltrated the mainstream… It has crossed over with fashion, and has also appeared as sculptures, toys, and even skateboards.

I believe that a true collaboration is when a company and an artist come together to create a sustainable and everlasting partnership… When they work really close with each other. A real collaboration is a serious battle. Many of the companies you’re referencing only use past drawings because they are popular or trendy, and I don't interfere at all because they’re working according to their values. But if I am going to do something, I will tell them one hundred percent what I want. So when they come up with something that is even better than that, I feel really happy.

It sounds like the act of creation and the artistic process is really what’s most important to you, rather than the end results.

I don't really care about categorization. I just draw because I want to draw! I don't set any limits or anything. I can draw all day long and I want to. Drawing is like a disease! I remember when I was in art class in elementary school, I was just drawing like any other kid. But the teacher noticed me and said, “You probably have your parents helping you, don’t you?” (Laughs) That was my first experience, and from then on, I draw even with or without having the feeling of liking it or not. These days, as I’ve gotten older, I can’t actually draw all day long like I used to, but still, it is a constant battle with myself as I attempt self-control.

Self-control is something you typically struggle with as an artist?

The hardest part is knowing how to finish! There are so many things that I want to draw. If I leave it be, I’ll continue to draw endlessly. Every time I look at my past drawings, I always think that I want to fix this or add that. I always discover something new in my past works. I can only finish a piece once the next piece starts calling me. Then at the end, I sprinkle a spice called love.