Mr. Simmons, what’s the first thing you do when you go into your studio in the morning?

Well, music is a major part of how I make art, so that's the first thing I do when I get in: I turn on some music, then I make coffee, then I start looking around the studio to see what I'm going to do. It’s always been like that for me even when I was growing up. Almost everything I did, whether I was working out in the gym or doing homework, music has always been on! I was that kid whose parents would be saying, “Can you turn the music down and study?” (Laughs) Music was also always in our house, especially reggae and dub!

Aside from dub and reggae, what were you listening to back then?

Oh, I listened to a lot of punk. A lot of arena rock, like, Led Zeppelin is still one of my favorites of all time… Black Sabbath, too. I really liked early heavy metal stuff in high school. But as soon as hip hop started and I heard early DJs creating these sounds, that just took me! It was a really great time to be a kid, just discovering that you could make new music out of sampling other stuff, taking Patsy Cline and putting it next King Tubby. And people would be like, “Wow, who the fuck is Patsy Cline!” (Laughs) If you wanted to be a part of the scene, you had to know your history, you would dig through records, memorize album covers, read the liner notes… My understanding of music became this collection of visual and audio history. And I think I applied that when becoming an artist.

“When I make art, I want to create something that has access points for the viewer to experience this collective image in their own experience.”

You’ve made several music-based installations, and your visual pieces often incorporate music themes in some way. Did your relationship to music change when you started incorporating it into your art?

I think with what I do, the approach is similar. I've always called it like visual DJing, that you take a little bit of this and take a little bit of that and remix it. It calls to memory where you were, who you were with, what was going on personally in your time… Our access points are different, but it becomes personal through this almost nucleus. And I think that, for me, when I make art, it's the same thing. I want to create or draw or paint something that has access points for the viewer to experience this collective image in their own experience.

How does adding a performative element impact that experience?

It becomes like a living sculpture, it can be performative when it's activated, and then it can also be a static sculpture. Recapturing Memories of the Black Ark, which has just come to LA for the first time at my new show at Hauser & Wirth… Dub music is in my DNA, and I was really inspired by Lee “Scratch” Perry’s original studio, The Black Ark, where he created that sound. For my installation, I created a stripped-down object, a sound system. It’s also anchored in the city of New Orleans — a carpenter fabricator drove around the Treme area and picked up wood from the houses that were destroyed, and we used that wood to make the speaker cabinets. I wanted to take some of the horror of Katrina and turn it into something good.

You did something similar in Seattle last year, creating an installation inspired by Seattle’s rock scene that also doubled as a performance space.

I think Engine Room was the little brother or little sister of The Ark. I like to think of it that way! Especially here in California, the garage is a space for creativity, for bands from the Seattle punk scene or rappers up in Oakland to go bash something out. I love these DIY forms of creativity. And so it’s been with that spirit that I’ve opened up these installations to performers, the only stipulation is that the Ark is used, the speakers are used in some way in their performance, so they can plug in directly, DJs can perform on it, bands can perform on it, spoken word has been performed on it.

It must be an incredible experience to see your artwork actually being used in an immersive way, rather than simply looked at.

Sure, I mean, it becomes this center of creativity which then extends into the people that curate the performers — because everywhere The Ark has travelled, the museum or venue chooses who will perform on it. And when it's not activated, the viewer almost sees the residue of the performance that occurred, you know, you see the footprints, you see the cigarette butts, you see the beer cans lying around… And that becomes part of it as well.

Aside from music, you also incorporate references from film, sports, and pop cultural history. How do you go about finding those references?

A lot of research! I'm a research geek, actually. It's funny for a kid that went to public school… I found ways to entertain myself in different corners of school. For me, the library was this really cool place to find and discover visual stuff. I really was obsessed with looking at old pictures and things like that.

Is it important to know the history of these references as well?

Yes, particularly with work that has any kind of political commentary, I think that you want to know, as much as you can, where certain things come from. The thing about making work that is even slightly political is you don't want to create the answers, you want to create questions. So to create the questions, you're going to have to know a little bit of the history of both sides. And the interesting part about research, it can lead you into somewhere else that’s even more interesting. 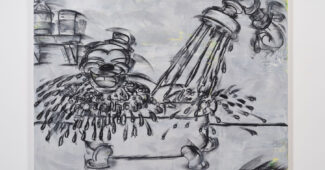 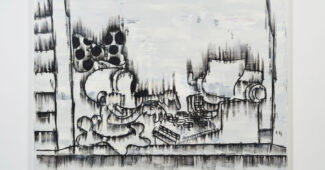 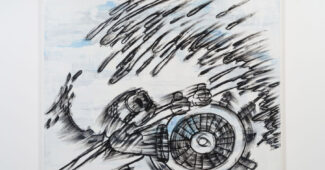 Okay so if you think about cartoons, I mean, parents will sit their children down and the cartoons basically babysit them. I started looking at things like Dumbo, the elephant with the enormous ears. You have these stereotypical black crows, and they teach him to fly. They teach him to take the thing he's being mocked for, and turn it into something really great. So the storyline of Dumbo is sweet — but what's under the skin of that is: you're still reinforcing the idea of the racist crows throughout the film. That all led me on a journey into race cartoons from the thirties and forties, that have been erased or scrubbed out of our history, that’s something I can't agree with, because that is who we are. And it’s become a real focus for me.

Does the inclusion of these familiar icons like cartoon characters help to communicate your messages more easily, or make them more accessible?

Yes, absolutely. I’ve always said, you can get a lot more out of a conversation with somebody than trying to hit them really hard. If I'm trying to get a message across, it doesn't help me to punch you in the face, it helps me to have to establish a conversation. If you can couch the issue that you're interested in something that's palatable, even the ugliest thing still has some petals of beauty to it. You have to be open to have that conversation.

Is it tricky to find the balance between portraying things you’re passionate about, like film and music, and representing the issues of race and class that come along with them?

No because I'm open to deconstructing or looking at and critiquing something that I'm passionate about, I think that you can't really be passionate about something without being critical of it. You can't just get absorbed in something and just go along with it. If you like something, don't be afraid to try to think about it critically and ask those hard-hitting questions.