Mr. Pesce, before this interview took place there was an announcement about your death on social media. How did you manage to rise from the dead?

(Laughs) The story is more satire than that. Last year an art critic in Florence named Sergio Risaliti invited me to do an installation in Florence at the Sala dell’Udienza inside Piazza della Signoria. In this square there is a painting by Michelangelo et cetera, so it was very prestigious. I asked to show an exhibition called Majesty Betrayed which is a commentary on the reality of women, that they are suffering because of the prejudices of men. I made a chair with the shape of the body of a woman with the ottoman connected to it by a chain — the image of a prisoner. Eventually, a journalist from France who had seen the plan for the exhibition sent an Instagram to the mayor of Florence saying that she was disappointed that he was using the Sala as a showroom for a chair company.

And what did the mayor say?

He responded saying, “I know nothing about that.” That was not true because he was following our project for four months! I was bothered that he didn’t correct this journalist. In the end, I ended up moving the exhibition to the Piazza Santa Maria Novella where there is a museum… But still, I was disappointed with the mayor’s response so I decided not to go the opening of the exhibition. When the mayor heard that I was not coming anymore, he said, “Gaetano is not coming? We won’t show this sculpture until he comes to Florence.”

So you pretended to be dead so that the installation would open without you having to be present?

Well, it was actually another art critic friend of mine, Vittorio Sgarbi, who suggested it. He said, “Gaetano, I will tell them that you’ve died — the mayor cannot say this sculpture won’t be shown until you come to Florence, because how can you come to Florence if you’re dead?” (Laughs) It was brilliant, very funny. Finally it worked! The exhibition opened and it was very successful. 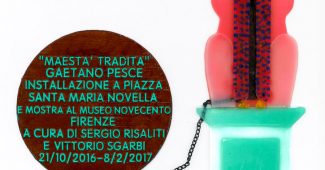 That seems like a pretty extreme measure to take for your art.

I think for me, it was in the end not only an installation and exhibition but it was also a performance. The performance of me dying, it was something else that led to my installation in Florence to be more rich and more strong. We received messages and condolences about my death from all over the world… Then there were collectors who, thinking that I was dead, offered to buy all of my work. It was very funny, but also surreal in that sense. This whole experience showed me that there is really this mentality that the object is not art.

Art is not only the traditional, like painting or sculpture, but art is everything that is able to make a comment on reality. Every day objects can still express something that is not only practical but political, religious, philosophical… Consider one thing — in the old time art was always practical because at the time when there was no camera to take pictures, so people would ask the painter to make a portrait. The portrait was practical — they didn’t ask for art, they asked for a portrait. So the portrait served a very practical function. Another example that I love is that Michelangelo when he made the Sistine Chapel with the Final Judgement, where you see hell with the flames and people burning… This was practical because it showed believers that if they don’t follow the rules of the church, they go to hell.

How do you find the balance between practicality and beauty where industrial design is concerned?

When you do an object, you have to satisfy the practical side. A lamp has to be able to send out light but at the same time, with the lamp you can express something else, something that has nothing to do with the light but with what you think inside you in that moment. You can sit on the chair but also the chair is able to get you thinking — for instance with Majesty Betrayed — that women suffer. My Nobody’s Perfect series is also an example of this. This was a collection of chairs molded by hand. Each chair was different and imperfect depending on who molded it: the series is a symbol of human begins, documents of the workers that built them. That is my contribution to what we call design.

Each chair even came with its own birth certificate signed by the worker who casted it.

Yes! When you do something that comes from your creativity, it’s something that comes from inside yourself. It’s the most intimate act or expression. When the chair came out and was finished in the factory, it was like that. It was very similar to the birth of a child: it’s unique. So each chair came with a certificate saying, “This chair is unique and it is only for you,” the date when the chair was done, the place where it was done.

Has today’s market been receptive to those one of a kind products?

In the old time, the market was very interested in buying copies — I think today more and more the market is dealing with objects that are unique with the customers, and that is a very important step. Even in architecture, innovation is very important but also very rare. In every center, you have maybe four or five examples of real architecture; the rest, what we see around us is buildings or decoration. It’s not architecture. Architecture is real innovation, something we never saw before. Le Corbusier’s Notre Dame du Haut or Falling Water by Frank Lloyd Wright, these are extraordinary examples of architecture. But after that, when they repeat that…

“With our work, we have to bring the future into the present. And that is the best we can do.”

Right, it becomes merely a copy or a decoration. This is what I believe. It’s not easy. When I was a student, I had the chance to sit in on a lecture by Alvar Aalto. He was late and when he went in front of us students and he said in French, “Architecture is very difficult.” And then he left. (Laughs) He said everything in a few words, a little statement which was very true. Architecture is very difficult and real architecture is rare. It’s important to talk about that because the students, they study and then they believe they are able to make architecture. But it’s a very different experience.

How does that compare with your own early experiences?

I was always trying to innovate; I don’t like repetition. Time is something that changes every moment, it’s never repetitive — I try to follow this example. Curiosity is also something that helped me in this respect because I think that progress is the most important thing we can have. The future is a beautiful time, everything is possible. With our work, we have to bring the future into the present. And that is the best we can do.