Mr. Kéré, what does it mean to innovate in architecture?

The kind of innovation that I’m doing is not magic. If I am in my home country of Burkina Faso, I would say to myself that my building should create shelter from the sun and heat, that it should be low-tech in terms of the cost and the creation, that it should be sustainable — but sophisticated. With the primary school that I designed in my hometown of Gando, we used these huge canopies to protect the structure against the elements, but they are open at the top so it can breathe, so that the hot air can escape. It’s not magic, it’s just physics; but for my people, it’s also innovation.

Your style of innovation finds a solution to a problem and fills a need — whereas a lot of other architects are more egotistical in their innovation: they want to have the tallest or the most modern building.

Well, if you hire me, I’ll build you the tallest building! (Laughs) You’re right, but it is also a question of economy. If you’re in New York, the world you live in is very wealthy, there’s a lot of business… Your need is different to the local community in Burkina where there is barely anything. In a city where you have no space, the tallest building is what you want to have. But in the world I’m working in, it’s totally different. In a rural zone in Burkina Faso where the need is for a good infrastructure, the feeling is still the same: a great building made out of mud that they never thought were possible, it’s like magic for them, the same way that the tallest building is magic for someone in New York. This excitement, this wow effect, this “Aha!” moment… It’s nutrition for everyone.

“It’s a sculpture, but it’s also architecture: it is animating, stimulating, yes, but also inviting.”

Your work has been described as “rural high-tech.” Do you like that description?

I hope people understand that I’m using my skills to create architecture that serves humanity. I’m not talking about charity, I’m talking about creating space for you so that you can feel comfortable, space that supports your work and activity. They can call it whatever they want. I don’t check that.

Is a project that is mostly of aesthetic value — like the Sarbalé Ke sculptures that you erected at Coachella this year — just as important for you if it creates a comfortable space?

The Sarbalé Ke is a space for celebration, like Coachella, so of course there’s an element of fantasy, you can be playful, colorful. I designed the structures after the baobab, a tree native to Burkina, some of which are so big that you can even enter inside the hollow center of the trunk. The Sarbalé Ke sculptures mimicked that, with an opening at the top so you can connect with the light. You feel enclosed, and the shade cools you down. You saw lovers hanging in one corner, a group of friends connecting in another, so there was the idea of a meeting point or reference point. So they did have practical uses as well as the more aesthetic, celebratory value. It’s a sculpture, but it’s also architecture: it is animating, stimulating, yes, but also inviting. 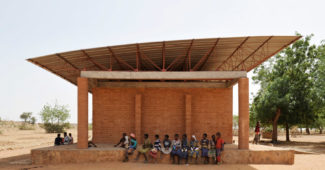 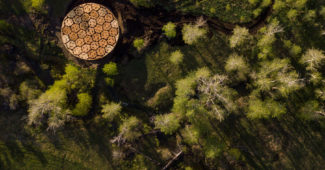 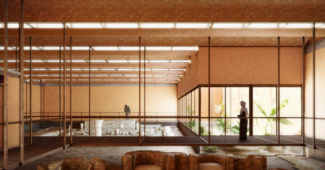 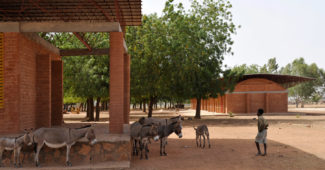 So, to be inviting, a space can be beautiful but it must be functional.

Right, it needs to be a place to stay. If you design in a hot region, you have to pay attention to the climate. So going back to the primary school, it can be a beautiful structure but it also has to make teaching and learning easy — that is a need. If you design a building in Canada where it’s cold in winter, you have to think about the scheme of the building in that sense. Here in Germany, there’s a lot of requirements you have to fulfill in terms of the user, in terms of energy, in terms of the community. These are all different things that make a building inviting. You have to think about the community that will use them because if you build a structure, it effects everyone. Otherwise, they will demonstrate against it like they did for the Stuttgart 21 project.

That railway project was proposed in the 1990s, and there has been debates over it ever since —including protests nearly every year.

Exactly. There was a need in Stuttgart for a train station but to build it, some of the older trees needed to be cut down. And as you said, there was a lot of demonstrations! They needed to defeat the political elite and there was a very strong conflict because the people weren’t involved in the process. So that’s why it’s good to have everyone involved, especially in the developing countries, you need the dialogue. You cannot do it without them.

But what if you disagree, like in the case of Stuttgart 21? How do you mediate between what the community wants and what you want?

Sometimes the best thing is to demonstrate, to do mock-ups. When I first went to build the primary school, the local community was not interested in using mud as a building material. We had to work together through mock-ups to show them that it can be a good construction material. The way I use clay is very modern, it has become very well-known in Burkina. We also did a project in Sudan called the Meroë Royal Baths Protective Shelter, basically a museum, a shelter around these ancient baths that were discovered… The locals wanted to have modernity, but you have to tell them that if you use glass in a place that is not producing glass, it’s very expensive.

“It’s about figuring out the best means for a given environment, it’s about the reality of the situation.”

Plus if something breaks, the local builders wouldn’t have the experience or resources necessary to fix the problem.

You’ve got it, yes. That’s why I try to do it differently. Mainly what I’m doing in Burkina Faso is doing teaching and training and demonstrating that it will work, and how to fix it using locally available resources. It’s about figuring out the best means for a given environment, it’s about the reality of the situation. What are the best tools to convince? Here in Berlin, it’s not the economy. It’s about public interest.

What about in developing nations?

In the developing countries, they are looking for infrastructure. It’s very different than here. When I do things there that create this infrastructure, people love them, people are inspired, it’s stimulating for the community. And that makes me happy. Life is long and it gives us many paths that we can choose from, and hopefully there is always enough time and opportunity to express our profession.