Flynn McGarry's new restaurant, GEM, is open now in New York City.
Inspirational Conversations
Rolex is proud to support The Talks as they continue to feature inspirational conversations with the creative icons of our time.

Flynn, when is the last time you surprised yourself in the kitchen?

A couple weeks ago, we put out this pasta course that I had no clue how it was going to work out — but I wanted to make essentially a ragout sauce out of squash. I cooked the squash the entire day, I ground it in a meat grinder, did everything the same as you would a normal ragout. When I tried it, it was like, “Why have we been making this with meat this whole time?!” (Laughs) “This is way better with squash!” It’s a funny thing where the dishes that I really like are the ones that take me aback, where I didn’t know it was going to work but it ends up tasting surprisingly good.

Are those dishes also the ones your customers react to the most?

Those are usually the most successful ones, yeah! If it impresses you as the chef, then it will definitely impress other people.

You seem to favor those playful twists on traditional dishes — like your Beet Wellington, or the winter squash dish that is plated to look like the inside of a squash.

The beet Wellington and the winter squash with Koji lime are probably the most literal dishes, but they are often the most impressive to people because they’re so used to the classic version so the second you change it up a bit, it’s that much more interesting to them. Those dishes are also a little bit familiar, at first at least.

Why is that familiarity important where food is concerned?

I mean, you’ve got to be realistic about it: people are going to like what they like and also not like what they don’t like. And all you can do is hope that they get it. So, especially with a tasting menu, 90 percent of the dishes are going to look not necessarily scary but exotic or new. When you get that thing that’s a little bit familiar but changed up, it’s a little bit of a sigh of relief: “Oh, I sort of know what this is.” You want to be doing things that are different because if we serve a bunch of things that they’ve already eaten, it doesn’t make the experience special. But at the same time, having a couple things that you can understand, that are very simple things done well, that grounds the experience. And it adds some humor to it! It pulls you out and makes you feel a little less composed.

Is that humor perhaps the most important element to your cooking?

I think I like to have a balance. I like it when certain dishes make me laugh, and it’s great to have dishes that confuse and excite you but at the end of the day, it all needs to taste good. That’s the biggest thing.

Plus, with food, most things have been done already. You can’t exactly do something that is 100 percent unique.

Nothing is truly different! There’s very few chefs in the past 10 years that have created something completely new so it’s really figuring out what your spin on it is, where you realize, “Okay, I’m not going to necessarily change the way the food is, I’m just trying to make a really delicious meal.” That’s what makes every restaurant different: how they do it, the little details, not necessarily the bigger concept of each dish.

Daniel Humm, whom you have staged with at his restaurant Eleven Madison Park, said that it wasn’t until very recently that he had enough confidence to focus on subtracting and going more minimal with his dishes.

I think with food, you need to have that confidence in your ability to potentially fail, potentially mess it up. No one really wants to make something bad but the amount of dishes that I tried out that didn’t work the first time but that inspired a new dish; you can’t really put value on that because all of my cooking has come from just trying things out. I refer to it as an encyclopedia of flavors… Now I can put a dish up and know exactly what it’s going to taste like before I taste it, and that really helps in experimenting. The thing is that with the type of cooking I find myself in, it does need to be something that is going to amaze people. That’s what we spend so much time trying to figure out. 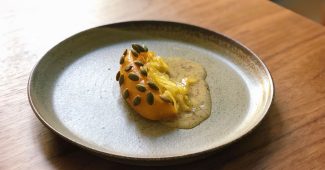 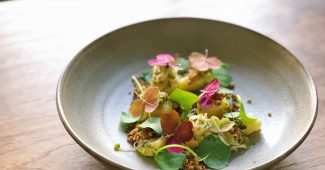 A writer at Eater once referred to it as performative; a kind of “the show must go on” scenario.

Exactly. When I first started out, it was very performative in a way that I didn’t even necessarily intend it to be because I was running a restaurant in my house and I was 13 years old. It’s like a literal theater or art piece, and while before I felt like the “actor,” now I feel a bit more like the director because my staff is on display as well. So, at a restaurant, it is a show — but it is also just people getting dinner! We have people coming in who might not like it. You can go to a play, you can say maybe it wasn’t for you, you didn’t like it. That’s fine. At GEM, we have people who come in and they don’t love their experience and then they want their money back. No one has ever left a play and said, “I didn’t like it, can I get my money back?” That’s the really thing: it is their dinner and I think that’s always going to be a weird vibe…

I think it’s the balance between food being a subjective art form, but also being a necessity for survival.

I mean, there’s this whole thing of “the customer is always right,” too. But that idea and it being an art form are completely different. If it’s an art form, the artist is always right. It’s their personal piece. But we’re trying to do something that’s really specific to me and what I think is great, but we’re also trying to please 36 people every night. And I think that I find challenging is that it changes all the time so you have to try to adapt with everyone who comes in. I think that’s how I’m looking at it now, just as someone genuinely doing something in a space that they’re comfortable in.

Inspirational Conversations
Rolex is proud to support The Talks as they continue to feature inspirational conversations with the creative icons of our time.
Flynn McGarry's new restaurant, GEM, is open now in New York City.
Life
World Guide