Mr. Ellison, as a musician, are you thinking more about the past or the future?

I always feel like the past informs my present, musically. With my last album, for example, I was really listening to Queen a lot — a lot, a lot, a lot of Queen. It was so influential to me. I had never really heard Queen before I worked on that album.

You know, I heard “We Will Rock You,” but I didn’t know, you know what I’m saying? So when I really dug in, it was like someone had held this back from me like a cruel joke! When I finally got it, that really shaped my last album. It’s funny, I was just thinking about that song, “Fat Bottomed Girls.” I think Freddie was like the first Sir Mix-a-Lot, low key! He was talking about big booty girls before anybody. Who else made a song about big butts first? (Laughs) He might’ve done it first! So yeah, Queen, that’s where I got all these harmonic ideas and that’s what made me want to sing more.

“When it’s so personal like with lyrics, I only think about performing it and believing it; it’s harder.”

You’re known primarily for your productions as Flying Lotus, and your rap as Captain Murphy. Were you nervous to sing on your last album?

Actually, it was when I started rapping that I was too shy. I didn’t know how it would go because I was writing all these fucked up lyrics… And I thought everyone was going to hate me! I’d never put out a rap album before, dude. I’d never done it! So when I started rapping, I didn’t share it with anybody because I didn’t know if people were going to like it. Then after a while it was like, “Fuck it. I’ll just tell people.” So, it took me a while to feel confident about it. But now I love lyrics. They’re really difficult to write — but I can write dialogue for my films, which I love… It’s so weird, right?

What’s the difference for you between writing lyrics and writing dialogue for a film?

When I sing a lyric or when I say a lyric, it should be real in some way. I can try to make a fake lyric real to me somehow, stretching the truth to make it funny or something like that but in the end, it always needs to feel real to me. With films, it’s someone else. I can say it’s someone else; it’s a different character. But when it’s so personal like with lyrics, I only think about performing it, and actually saying the stuff, believing it; it’s harder.

So you don’t draw from personal experience for your scripts?

No, I definitely have my own experiences that I pull from. Like, for example, I had a very terrifying earthquake that I was in as a kid that traumatized me. And that was where I pulled from for my new film, Kuso, initially: that feeling of life after the earthquake, how I felt in that moment. 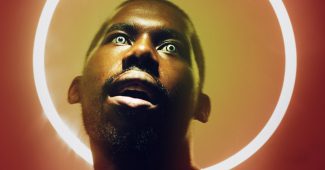 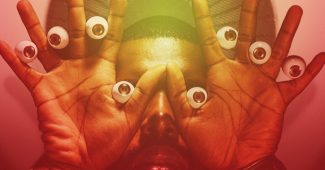 How old were you when that happened?

I was 10. I was at home in bed and I woke up in the middle of the night, the house was jumping all over the place, my mom had to bust in the room and got me out of my bed and we had to get out of the house because it was falling apart. In the distance you hear all these crazy sirens you’ve never heard before, like, end of the world sirens, people on a megaphone, “Do not leave your homes!” It was apocalyptic to me as a child. I’m sure there’s way more traumatic shit but for me, it was I got a glimpse of when the world ends. So I pulled from that moment in my childhood in California.

Was that in Los Angeles?

No, I didn’t grow up in the heart of LA. I grew up in the San Fernando Valley, which doesn’t feel like LA. It’s a bit different. It’s still LA County, but it’s not the same, it’s not the kind of place where they embrace you for being a weirdo. You were just left alone with your Nintendo and that was my life. Plus my family comes from jazz, so my love of hip-hop… I was the outcast there too. I didn’t have a lot of friends who were interested in music when I was coming up, there was no Internet, I didn’t really connect with anybody on that. The Internet made it real for me. When MySpace came out, people put my music on their little pages, and I was getting like 30 000 plays a day, and I was like, “Dude, something is happening.” But music wasn’t a reality for me when I was a kid.

Is that why you decided to go to film school instead of pursuing music?

Yeah, I thought I could maybe get a job doing something in the film industry. I am a big cinema nerd! I’ve absorbed a lot of films. My biggest influences probably come from Japan, Ichi the Killer, things like that. Takashi Miike is definitely one of my top five, you know? So now that I’ve started making movies myself, and especially with Kuso, I really just wanted to make a horror movie that would make him smile. The film feels unique to me, and I’m proud of that.

It also felt a lot like an album. There were a lot of singles, if I can put it that way.

Absolutely, yeah. That’s a good way of putting it, man.

And is that something you set out to achieve?

I never thought about it like that. I kind of learned my process in the doing. I didn’t know what I was going to do, really, I didn’t have some ultimate goal of what I wanted to say. I just felt connected to this world and I was living in it, man. I was living there for two years.

“I think about my place in the universe sometimes and I’ve accepted that I’m here to do certain things.”

But the film is as experimental as some of your albums are.

Yeah, that’s fair. A good friend of mine, Mr. Oizo, Quentin Dupieux, he is actually one of my biggest influences near me. He would come down to the set when I was working. And one thing he told me was, “Make your films like you make your music. Use that same energy and that same way of thinking,” and that is totally what I do. I don’t know completely how it’s going to work out. But when I sit there at work, something will happen. I think about my place in the universe sometimes and I’ve accepted that I’m here to do certain things.

What kind of things?

I just have so much more I want to say now. I just have to be the guy who does the stuff. I have to be the one who says the shit, man. I’m the one who has to disrupt the conversation. That’s just how I naturally am. If it’s all going this way, I’ll be like, “Well, what happens if you go that way?” You know? I’m just here to give you something else.