Erwin Wurm's new solo show, New Work, is on display at Galerie Thaddaeus Ropac's Ely House London from 19 February to 23 March 2019.
Emerging Masters
Rolex is proud to support The Talks’ new interview series about the cultural leaders of the future.

Mr. Wurm, do you think about time as an artist?

It was Michelangelo who said that when he makes a sculpture in bronze, it should be able to be rolled down a mountain and still exist for 500 years. But in our time, everything is short-lived, so I started thinking about how I can make a piece that will exist for a month, for the period of a show, for two weeks; the lifespan of the art became shorter and shorter.

Exactly, it’s like a brand to call it “one-minute” — It’s never a minute, it could be 10 seconds or two minutes, it’s just the synonym for short. These sculptures also feature the physical presence of a person and an object. I invite the public to participate and follow my instructions to create these specific poses with an object. The piece itself is that short performance, but what’s very interesting to me is using a Polaroid camera to document the performances; you take the picture and it develops immediately. Every Polaroid is an absolute original, and it exists only at this one time.

“My One-Minute Sculptures are very much about ridiculousness, embarrassment, sometimes sexuality, psychological aspects...”

But do you think the Polaroids also add an element of permanence to the brief performances because they are now recorded and documented in the photo forever?

Yes, that’s true, you’re right. I guess I realized that if they are only performed, then they are very ephemeral — maybe too ephemeral for my taste. And I thought it would be better to make something that is a record of the work, so I started taking these Polaroid snapshots. But all of a sudden you’re playing a game with different rules…

A few years ago you said that when you have a camera in your hand and call something art, people are prepared to do very crazy and stupid things.

Right. I also realized that my One-Minute Sculptures have a very interesting social component because it’s very much about ridiculousness, embarrassment, sometimes sexuality, psychological aspects. And at the beginning, it was difficult to get people to participate in them because nobody knew me as an artist. At one point, I was invited to an exhibition in a gallery and they made a newspaper advertisement: “An artist is coming to town and he does this and that and we are looking for volunteers.” I didn’t want to pay because then it has another connection — people do a lot of things for money!

Many people always applied, yes. But I’ve realized that they, in a way, used me, and I, in a way, used them even though money was never a part of the game. There was something else… I could ask them to do silly things, I could ask them to test their self-esteem and self-confidence and then it became another social issue. It was very exciting. I also noticed a cultural difference, when I first did the sculptures in Austria, Germany, and Switzerland, nobody went on stage, nobody did anything. 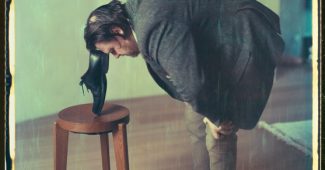 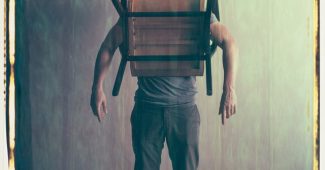 I guess in America it would be easier to get people to pose for your sculptures.

In the States, it was very different, yes. But for my show New Work at the Ely House in London, I’m no longer interested in playing this game, and I have just asked my friends to pose for the sculptures and Polaroids instead of asking strangers. When I first started, however, it became even more different, for example, when the Red Hot Chili Peppers made a video with my One-Minute Sculptures and many other big brands and stuff began appropriating the ideas.

Your work actually became part of the zeitgeist.

Some years ago on the Internet there were many, many thousands of images of One-Minute Sculptures that were not made by me. They must have read about my work or seen photos of it, so they were inventing the poses and concepts themselves, and that was so great, getting to see the work out in the world. The zeitgeist has always been interesting for me as well because as an artist, you have to use the formal language of the time period you are in: if you’re a little experienced, it’s easy to say if a piece is from the seventies or the fifties or the thirties or 1819 or 1780. Every art piece speaks a very specific language which is related to a very specific time, or very specific social issues.

Well, think about my Fat Cars series. The series is about this basic idea that when we gain weight or when we lose weight, we are actually making sculptures because we add volume and take volume away. This is the basic notion of sculptural work. And here you see the dangers in that notion, in the social issue of gaining and losing weight. It’s a kind of paradox situation, and that’s what I’m interested in.

The Fat Cars were apparently inspired by the luxury cars you would see being driven around your native Austria as a child. Does the current zeitgeist inspire you in the same way?

Sure, I mean, our time creates wonderful things, wonderful artists, musicians, writers… But our zeitgeist is also very much related to social media and the aesthetic of these social medias. And I’m not sure if this is so great. Many people use it, they give everything away, every private thing, they show everything they’re doing without expecting that it might come back one day when they don’t want to see this… This carelessness is surprising. It’s frightening and it makes me wonder. And if you call this the zeitgeist, then I’m not so happy about this.

You once said that you are most interested in today and now — it seems like that has changed a bit.

I’m very selective now. At the beginning, I liked everything! But now I nearly like nothing. Maybe that’s aging. I’m an old dog now, maybe that’s the reason why I bark so often. (Laughs) But where my art is concerned, that statement is still true… I live now. I want to show my work now as much as possible, and I want the work to go out to the public so that people can discuss it, like it, or dislike it. I have some artist friends who believe in success after death because that holds them straight, it keeps them up. But I live now and therefore I’m most interested in what’s going on with my work now. After I’m dead, it’s another story.