Mr. Ripert, many years ago you went to a psychic who told you that you would have a restaurant surrounded by water. Today you own a seafood restaurant called Le Bernardin in Manhattan — do you believe that’s connected in some way?

It could be... I remember when the psychic made the prediction, it was more about the geography of the restaurant than the philosophy of the restaurant. When I moved to Paris at a young age for my first restaurant — it was in the center of Paris where you have the Île Saint-Louis and I was like, “That’s it, that’s the place.” But it wasn’t! I was looking for cities all over the world and I was like, “Where is it?!” I thought maybe London… I don’t know why I never thought about New York, but it’s obvious, it was right in front of me. But after all that, when I’m cooking I’m not thinking about the ocean. (Laughs)

What is going through your mind in the kitchen?

“I learned that Buddhism is a philosophy, it’s a religion and it’s a science. It has an influence on your entire lifestyle.”

You became a Buddhist in the 1990s. Does that practice help you to reach those Zen moments in the kitchen?

Sure, but it’s much more than just the cooking. When I first found Buddhism, it was in 1989, I was at the airport and I found a book about Tibet that led to my initial interest. And then the Dalai Lama got the Nobel Peace Prize and I read the speech of acceptance and I was blown away by it. I learned that Buddhism is a philosophy, it’s a religion and it’s a science. It has an influence on your lifestyle. Buddhism has definitely changed the way I interact with and inspire my team.

The culture in a kitchen is very antiquated compared to the culture in other industries. Very often, kitchens are managed in a violent way. Anger is a weakness. It’s not a quality. I used to be one of them so I can speak from experience and with expertise about it. Kitchens are very stressful: it’s a tight environment with a lot of people working, we have pressure with time, it’s hot, it’s humid, it’s dangerous, it’s long hours… There’s a lot of conditions that can create frustration and anger. So Buddhism taught me to change the way I manage the entire team and the way I interact with people. We try to bring as little stress and frustration as we can.

The Dalai Lama once said that genuine humility is having the capacity to rise to anger but deliberately deciding not to do so.

It is always better to have cooks who are focused and motivated and happy to cook. We don’t want them to be stressed. Of course, anger happens sometimes, with one of the sous chefs, one of the persons in charge or even myself — maybe once every two years. We are not proud of it when it happens. We are not cultivating this attitude. Ultimately, when everything is finished, we apologize. And I think it’s very important to acknowledge that we are wrong. I do not accept physical violence or screaming… That is not acceptable to me. 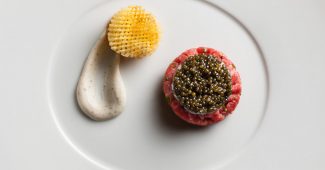 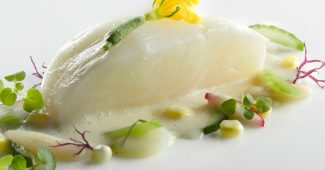 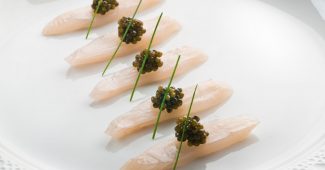 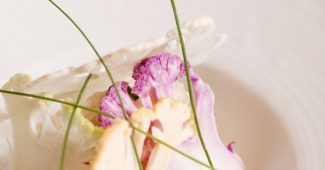 Does this kind of thinking extend to your food? Are you a Buddhist in the way you cook seafood, for example, even though one of the main principles of Buddhism is not to kill?

Absolutely. I am sensitive to all of this. Le Bernardin serves fish, products that are animals, sentient beings, right? We don’t want to kill. I don’t think the moral struggle of killing animals to live is exclusive to Buddhism… But that is still a conflict for me.

How have you been able to reconcile those conflicting ideas?

I have been discussing this exact problem many times with my teachers. What I do is I pray for the life of those animals: we believe in reincarnation so I’m praying for their next life. I’m praying that they free themselves from Saṃsāra, which is the cycle of birth and death. We don’t want to see waste, so we do everything possible to have as little waste as we can, again, because it was a life that was sacrificed. I also teach my cooks how to respect the products. I think about the happiness we bring people, and that counteracts the suffering.

I guess it comes down to weighing the pros and cons.

Oh absolutely. I’m not yet totally happy with this rationalization… But it’s for me still an interesting debate internally. But look, it’s too late in my life, I’m 51, I’m not going to open a vegan restaurant. I was a chef already when I started to be interested in Buddhism… I am not going to change that in this lifetime. If I closed Le Bernardin today, it would not have an impact at all on society, or on our competitors. You’ll still see restaurants serving animals everywhere. So, we just try to be sensitive to the subject of killing animals and we try to do the right thing.

“I decided that I reached my level of contentment. Ultimately, I found my happiness, you know?”

Le Bernardin is one of only a few three-starred restaurants in New York.

It is, there are only four spots in New York with three Michelin stars. Do you feel the weight of that status?

I don’t care about the idea of the celebrity chef… You know, if someone in the street recognizes me I say hello and end of story. My life is very simple, it’s from my house to Le Bernardin and from Le Bernardin then to my house and then to destinations with friends. I spend a few hours by myself, I walk alone through Central Park. I make sure that I see my family, my wife, my son. I like intimacy and it fits my lifestyle, it fits what I like.

So you’re not planning on opening a series of Le Bernardins around the world anytime soon?

Well, we have another restaurant in the Cayman Islands called Blue by Eric Ripert and it’s an exception to the rule. I tried to expand because at one point a lot of chefs were doing that and it was part of how you measure success. We had three restaurants and I was consulting to two more, but I really disliked it, I really didn’t like that at all. I like to work with people that I see and I can interact with directly, I like to work like an artisan. I’m very passionate about this place here and it’s very a big challenge to have a big restaurant and to deliver the quality or experience that comes with food. I decided that I reached my level of contentment. Ultimately, I found my happiness, you know?