Elmgreen and Dragset, what is more important for you as artists: the medium, or the message?

Michael Elmgreen: Well, the amazing thing about contemporary visual art is that it generates an enormous freedom, where your message can be the most important thing and then your medium comes secondary, or your medium can even adjust to what you want to say.

Is that why you choose to work in so many different mediums?

Elmgreen: We're kind of promiscuous in our formal language: we do sculptures in bronze, or steel, or wood. We do whole rooms as installations… a little bit of everything, sometimes even photographs. So we don't stick to a certain kind of material to express ourselves. Martin Kippenberger, who was very far from our aesthetics, has –_despite this – been a great source of inspiration for us because he really allowed himself to do very different kinds of exhibitions, working in all kinds of media.

Ingar Dragset: We like the idea of entering new fields with fresh eyes, and, seeking advice from people that are specialized, having an exchange and learning from them — or even sharing our knowledge with them, as we might come with a completely new angle, or new a material, to a certain area.

Elmgreen: We maybe romanticize the idea of being amateurs. If we become “too good” at one thing, we tend to try something new. We might go back to it years later, but we often stop the production of certain kind of works when people get too used to them or when critics know what these works are about and can describe them in a very automatic way… Then we think it's time to change. It’s all about exchanging old conventions with something new, and daring to go through a process of ongoing change.

“We feel challenged every day, I think it’s almost in the DNA of our process.”

Are you also trying to actively challenge each other, even after so many years spent working together?

Dragset: Certainly, you know, we feel challenged every day, I think it’s almost in the DNA of our process. One thing is, of course, that we both come up with ideas all the time and and then we enter into a sort of editing process where often there is rejection of an idea by the other person. I propose something, Michael says, “No, no, no, I don't really think that's good.” Or if it's a good day, the other one would say, “Yeah, that's okay but let's turn it upside down or something.” So in that sense, there's a challenge all the time.

How do those challenges usually resolve themselves?

Dragset: We always try to find another way rather than make compromises. Because once you make a compromise, nobody's really happy. It's always better to just find an alternative, maybe go the opposite direction.

Elmgreen: I think most artists actually collaborate on some level. I mean, artists have assistants, they test out ideas in relation to their assistants, or they have spouses and speak about their ideas over dinner, and test out reactions from others. We just have a more formal way to test out our ideas because we have based our practice on collaboration. But I think most artists have some sort of filter before an idea is presented to a general public.

Your work is very visually pleasing… Do you use aesthetics to appeal to a more general or wider public?

Dragset: Our work might not appeal to everybody — but of course, we have used design elements as a means of communication. This comes from a general interest in design and architecture. We grew up in Scandinavia, and we consequently have a love-hate relationship with minimalism. We realized that there's certain problematic values embedded in minimalism, and that a certain Nordic taste represents a kind of Protestant worldview. It's all sort of antiseptic, very functionalist, based on monocultural mores. You know, when everyone's more or less the same, everyone thinks the same things are pleasing. So we’ve used the generic Nordic aesthetic for its attractiveness but have also challenged it by adding in different narratives or different values.

Is it important for your work to exist in public spaces in order to be more accessible?

Dragset: There needs to be a level of accessibility, of understanding, a moment of recognition even, provided for the audience in the public sphere. This can make people more willing to engage with a work somehow, to stop and try to find a connection between this artwork and their own lives. In Norway, for example, we have a sculpture of a little boy standing on top of a really tall diving board, pointing out towards the Oslo fjord, which presents a sort of ‘dilemma’, as the work is called Dilemma. “Should I jump or should I be brave enough to back walk down?” What actually is the bravest thing to do? This is an existential question recognizable to many.

Elmgreen: I mean, it's a bit similar to people who write papers: some people express themselves whilst throwing in tons of academic terms that are only understood by a very tiny group of people. Then there are those that can express the same opinion in a language that most of us share. But in our working process, it's not because we have extremely academic ideas that we try to boil down to be understandable for a general public. That would be very populist! It’s simply that our ideas come from a language that might be understood by more people because we speak about topics that many people might share or can relate to. 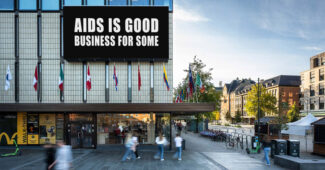 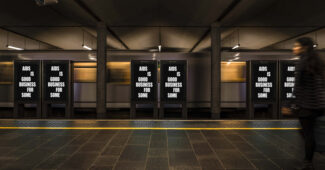 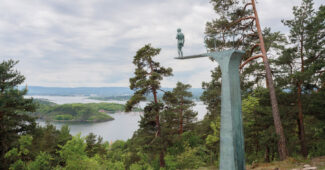 It's funny that you say that because it's a very German thing to make things more complicated than they actually need to be. Do you also use humor in your work?

Elmgreen: I would like to label it absurdity, in the same way as Samuel Beckett uses the absurd in his plays. Through absurdity you can speak about something either really sad, really worrying, or quite profound, but it might come out in such a grotesque manner that you also can laugh at it.

Is absurdity also a good tool to address social and political issues?

Elmgreen: Sure, serious matters could be discussed in a different way, one that's more complex than you might find in public debates, where most issues seem to be reduced to fake or true, right or wrong.

Dragset: The absurd can trigger a little laugh, put a smile on one’s face and make one more willing to discuss urgent themes that are at stake - rather than say, “Oh this is so heavy, I don't want to deal with it,” which I feel happens a lot in our society!

That’s something you’re actively tackling with in your works that deal with the AIDS crisis — subverting the language to talk openly about this sometimes difficult subject.

Dragset: Right. In February this year Henie Onstad Kunstsenter near Oslo, initiated a collaboration with us and Clear Channel, a company that has advertising space almost everywhere in the world. They offered 700 screens to present different artworks on. And we decided to take a past work of ours about the AIDS epidemic as a starting point, reiterating a neon work from 2011 with a message and placing it in public spaces, on advertisement boards and screens across Norway. The first part of the message comes up alone: “AIDS is good.” And then the second part comes up: “Business for some.”

Elmgreen: It's all about the timing. There’s a split second where you only see the first half of the sentence, which is of course a very upsetting message. And then when the second part of the sentence appears, you get the full meaning. In that way, the artwork raises the problem of privatizating our health industries.

Dragset: It's a very simple sentence because it's basically just stating the truth. But due to the history of HIV and AIDS and all the stigma around it, the sentence works on a very emotional level and people might get a bit of a shock, as if this is completely outrageous. But that’s the reality.