Elizabeth Peyton's new solo show, Eventyr, is on display at Galerie Thaddaeus Ropac Salzburg until 25 August 2018.
Emerging Masters
Rolex is proud to support The Talks’ interview series about the cultural leaders of the future.

Ms. Peyton, what makes you choose a personality for your work: admiration or fascination?

Is there only one answer to this question? (Laughs) It’s not exactly like that. I just have a feeling of urgency that I want to make a picture of somebody. Probably because I’m very inspired by them or there is something I really want to know about or understand in them. So, fascination? Yes. Admiration? Yes. But also curiosity — I get fascinated by what people are doing and what they’re making and how it’s what I need at that moment.

Have you always harbored that fascination? Apparently you once considered becoming a stock broker instead of a painter.

Well, my parents were kind of bohemian so at one point, as a little bit of rebellion, I said I wanted to be a stock broker. It was something I could say to them that made them scratch their heads. But it really lasted about six months when I was 12! But for me, portraits have never gone out of style.

“I felt really lucky that the one thing that wasn’t being noticed out there, I was really fascinated by.”

So you loved portraiture even when it was considered unfashionable by many in the art world?

It was only within the art world that maybe portraiture was unfashionable but to the real world and as we’ve noticed especially today: everyone’s constantly taking pictures of themselves and of their friends and looking at paintings of people from other times and things like that.

Was it difficult feeling somewhat excluded as a young artist? Or was that more of a driving force for you?

Actually, it never felt bad somehow. It just gave me more of a feeling like this is really missing so there was something for me to do there. I felt really lucky, you know, that the one thing that wasn’t being noticed or cherished out there, I was really fascinated by. When I painted Napoleon, for example, that was the first time I really understood the power of portraiture.

I think I understood that history is really contained within people, that’s why it’s so powerful, these portraits. People look up to people.

Which people do you look up to?

I like Ludwig II of Bavaria, I’ve done a portrait of him. I was fascinated with what he was born into and then what he did with it. He had this wonderful sensitivity to art and music… And he gave us Richard Wagner. That’s huge!

Have you ever been to his castle in Bavaria?

Of course, yes. If you look at those castles… There’s something about the completeness of the world that he wanted to be in all the time. It’s like that book À Rebours, where he retired and he wanted everything to be a seamless picture that didn’t bother him, like, even outside the windows, he had his groundskeeper dressed in Flemish clothing from centuries before. It’s like the constant painting! I’ve also listened to David Bowie since I was 12 like a lot of people and I tried to make pictures of him for a long time. It wasn’t until I got into opera that I figured out a way to make a painting of him. There was something about his face… 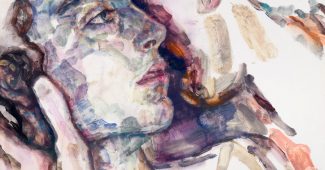 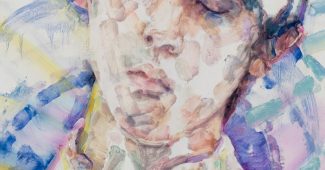 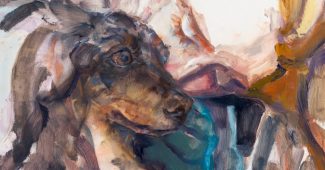 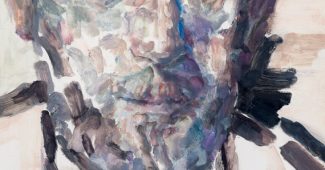 Where do you find the faces that you paint these days? Or do the faces find you?

Oh they find me! This picture here behind you, I was working out on a treadmill and the television was on and I suddenly saw what must have been an animal show in a foreign language and I said, “Look at that, look at that love!” I just took some photos of it because it caught my eye. And then the face of the dog, I was working on it for two years before it sort of morphed into my dog. I didn’t realize it at the time, but then slowly it revealed itself, it is my dog I was painting. So, yeah, I just keep my eyes open and see what comes and try to follow my interests.

What attracts you in a face? Is it the eyes? The line of the lips, the wrinkles, the smile?

I think it’s the personality that makes those lines and eyes and colors and wrinkles. You know, I think people’s faces look how they do from a lot of internal conscious decision making or even just the movements, how they use their face — it has to do with their emotional character. I think everybody is beautiful, can be beautiful… It’s sort of a matter of choice in some way.

It sounds a little strange, right? But I think people don’t really notice what people actually look like. I guess you could say with twins they look exactly alike but the way you perceive them, one being more confident and powerful, for example… That is his beautiful. And so, I think it’s those certain qualities that really come forward more anyway.

That makes me think of your painting of our Chancellor Angela Merkel. So much has changed in her face since you first painted her…

That was one of the rare times that somebody asked me if I would make the picture. She didn’t ask me, of course, Vogue asked me. And I just happened to have been in Berlin… In that time too, it just seemed like she was the most important person somehow.

“I think if you have that feeling of why you need to do something, you’ll find a way.”

Did she sit for you?

No! Thank gosh, she does not have time to sit for me. She’s got better things to do. (Laughs) I looked through so many pictures and interviews with her to make the picture, so it became kind of a collage of her face from so much time… But you’re right: her face has changed so much in the last two years.

The problems of the world…

It’s all on her face, no? It directly mirrors what happened, I think. You can just see her expression. The light has gone out of her face. But that’s where we’re at. I think the final circle in being an artist is connecting, making some conversation to the world you’re in. I think if you have that feeling of why you need to do something, you’ll find a way. And I think that really takes you forward! If you’re feeling that, maybe other people need that too.