A monograph of Ebecho Muslimova's work is due out with JRP Ringier later this year.
Emerging Masters
Rolex is proud to support The Talks’ new interview series about the cultural leaders of the future.

Ms. Muslimova, for years your art has been based around your character “Fatebe.” Is she your alter ego?

I wouldn't call her an alter ego. She may be a self-portrait, but not a self-portrait of me, if that makes sense. I mean, she’s a drawing — a flat drawing, and I’m careful to keep her flat and unshaded. I think she’s more of a surrogate self, or a self-device. She allows me to flatten out certain emotional or mental experiences that are formless because they are in my own interior. She's just a simple gag that flattens those ungraspable states into a very readable form.

Is that what all good art accomplishes for the artist?

I don't know! I can only speak to my relationship to what I'm doing. But at the same time, sometimes when I'm here describing her, I realize that I'm just like, describing art making. Maybe that's why I'm so involved with her — because she's this ultimate muse for creating! I developed her into an entity that has their own personality and has her own way of existing in her world. She surprises me! And that’s what all my doodles return to somehow.

“I was desperate to communicate something. And humor seemed like the fastest way to do that quickly and efficiently. The idea doesn’t work unless I chuckle at it, unless I can laugh at it.”

The graffiti artist Andre Saraiva says he’s drawn his character Mr. A hundreds of thousands of times, like a compulsion.

For me, it’s not compulsive. It’s not necessarily a daily practice, although sometimes it happens to be. I’m not obsessed, and until I have to make a drawing, I would rather be doing something else! I want to make a really good drawing, so there’s a lot of wandering back and forth, both physically and mentally. And then I'm afraid to make a drawing.

Well, what if it's not truthful to what I want, you know? There's a lot of preparation before I make something. Even when I’m making a show, like for example my most recent one at David Zwirner, I worked right up until the night before the opening. And that’s because this character is a tool for me to reflect on what is going in me and around me, it’s very of the moment. During the pandemic, for example, I thought a lot about the squeezing or expanding of space around a body or a mind. I think the relationship with physical spaces in which our bodies are made to spend time in really became sharper for me during the pandemic: the four walls you physically chose to kind of spend most of your time in, that kind of restriction on the physical self.

Fatebe has appeared snaking around a staircase, trapped inside a jar, pressed against a window, and even with liquid spilling from her orifices. Do those different positions represent your emotional state at the time, whether that’s playful or something more serious?

I started drawing after a really like frustrating time in school — and in retrospect, I realized that I was desperate to communicate something. And humor seemed like the fastest way to communicate something very quickly and efficiently. The idea doesn't work unless I chuckle at it, unless I can laugh at it. Even if it's a sinister situation or something, there has to be a dark humor to it because then I know it is speaking somehow, rather than wallowing. For the more serious ones, like the last one you mentioned called “Leaking Vessels,” sure, in that particular time, maybe I was feeling like I'm being drained. But I often feel that way. It's not that I'm trying portray my feelings, but that I'm able to use my feelings as material to think about form and composition; the stuff that makes a visual art.

Either way, it sounds like there’s a lot of emotional labor involved.

Well, making art is not a pleasant feeling. At least for me. I'm sure this is true for many other creative labors… But I control her, and I place her in these situations, I create the problems that she has to be her own solution for. And yet still she holds the outlet for me to come up with the solution. So until she decides to appear in a way that makes sense to me, I am held captive by this issue. And that's our relationship! It's kind of a binding situation. This relationship to the self, it's a real prison sometimes. And one that I also enjoy. 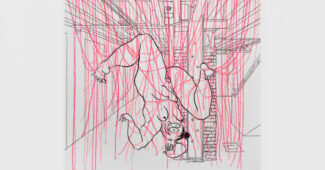 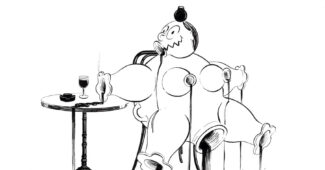 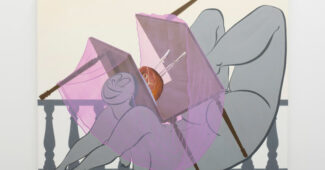 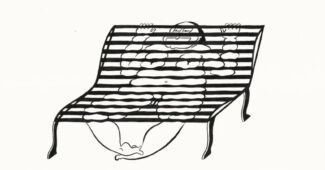 That seems like it could be really exhausting. Do you sometimes need to take breaks from your art?

I do get tired — and then I can make a drawing about it! That's the binding thing. Over the years, there's been times where it’s like, “How many more can I do? What if I tried to kill her off? Okay, well, I'm going to kill her off, I should make a drawing about killing her off.” And then I would make the drawing and it would relieve that feeling, like I just cleared the space for the next drawing. So, you know, I take breaks and make myself take breaks, but I always come back to it.

I can imagine it’s also somehow comforting to keep drawing the same character over and over again, like a familiarity.

Definitely. I know her. And knowing her relaxes the fear of not knowing what she'll become. I know that no matter what, she can just kind of lay there and be what she is. There can be a limitation in drawing one figure in one frame though. Early on, I’d set up these constraints — like no shading, because shading gives the possibility of depth that I didn't want. She’s just black line, she's literally overexposed, and those constraints had to be there in order for me to grow what she is. But then years later, I realized that I didn't have to that. I could expand things around her because she's become so concrete that I didn't have to protect her. She is strong enough to have things expand around her.

You’re also using color now — is that another way you’ve expanded things around her?

I mean, it’s been many years of drawing her in black and white. I found myself being almost jealous of people using color! I wished I could do that. I realized that I had really just made up this black and white rule for no reason. I went for it, but I had to figure out a way to use color properly. Because she's always alone, the color would be like another character in the room, like a cameo. There’s this Roger Rabbit effect to her sometimes in the paintings where she can interact with this colorful world and speak to color as if it’s another element.

Do you enjoy that slow evolution of every so often adding new elements or exploring new mediums? Would you consider one day even adding a new character?

It's the pace that I've just been really happy with. It’s so organic. That's what I need to develop! I think the other character is the site specific element; the architectural set, the physical setting where the pieces are, and the relationship to the viewer. For Fatebe Digest, I made these drawings in a set size and framed all the same way, and they can be contained anywhere. But then in the second room, which features the two large paintings and a mural, the mural was site specific to the space just because it took up the whole wall. I think the space itself becomes a kind of character, another player that she is interacting with. And I'm excited to keep developing that.

Emerging Masters
Rolex is proud to support The Talks’ new interview series about the cultural leaders of the future.
A monograph of Ebecho Muslimova's work is due out with JRP Ringier later this year.
Life