Mr. Gordon, you once said that art is a bit like sneezing in public and that the gallery stops it from actually getting on the meat. When was the last time you sneezed?

Well my allergies are so bad that I can’t stop it. (Laughs) I was coming out of the bathroom at a Thai restaurant last week and I sneezed as the waitress walked past. She was quite surprised. That was literally when it last happened, but when have I done it art-wise? I think it is as much about social behavior, too. One time that really stands out was probably in New York when I did this piece with the pianist Helene Grimaud. It was such a pressure for me that my use of various anesthetics was on a champion’s league level. I should have been a little bit more careful!

Didn’t you once say that from the moment you stepped into the Armory for that piece, you wanted to piss all over it? That might have been part of it…

That was a bit of sneeze, true. An involuntarily evacuation of fluid from your body — or a voluntary one. I once got donkeys into the Palais des Papes in Avignon to piss on the floor. That was a funny thing.

It was while doing a whole suite of works that I made in Avignon years ago. This curator friend of mine proposed to the Palais des Papes, the pope’s palace, that we could do something. I wanted to take snakes in there because, you know, bringing snakes into church is supposed to be forbidden. They agreed, so we brought real ones. So I thought if they let me bring in snakes, what about donkeys? When I started to give the donkeys some water, their trainer said, “No, don’t give them any water because they’ll piss.”

“There is something quite beautiful with the art thing, that you can only hold it back for so long and then you have to do it.”

Which I guess sparked an idea in your mind…

That sounds like a metaphor for your urge to make art.

Right, you can hold it back for so long but at some point you just have to let it go. But there is something quite beautiful with the art thing, that you can only hold it back for so long and then you have to do it. That is very different than many other fields that we know. I would say that maybe an office worker or a bank worker doesn’t feel that same thing, but since I am not an office worker or a banker I don't really know. I don't know if you are banker if you really have to bank.

I think they just really want to make more money.

But I don’t know if you can’t stop banking. You just can’t stop it. You wake up, you’ve held your banking back for so long that you just wake up and you just… bank really badly. (Laughs) Traveling so much for the last two years, every time I come back to Berlin, of course I go home and I want to see my daughter first, but then I start to get edgy and I have to come here to the studio. It is almost like an involuntary thing. It sounds a bit too romantic for my taste, but it is just the truth. I can’t really stop it. 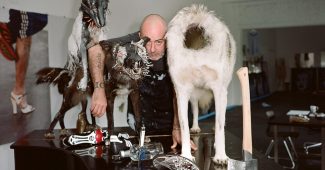 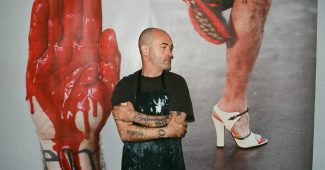 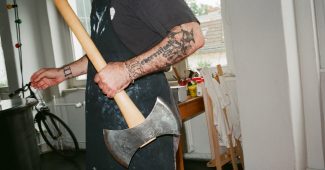 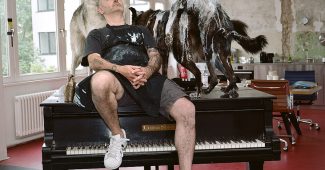 What’s the first thing you do when you get to your office after being away?

What kind of drawings?

Really good ones. (Laughs) When I was a kid at school the first thing you did in the morning was called mental arithmetic, and obviously in Scotland “mental” also means crazy. I liked the idea that mental arithmetic is just crazy arithmetic, which means you just write anything. 5 plus 10? Mental! 105. I loved playing with the words like that when I was young, but also it was this idea of exercising something every day. Just get your brain to start. You sit down with a pencil or a crayon and a sheet of paper and you just release something. I don't really know what kind of drawings I do, it is just important that I do them.

I read that you are driven to push things to the extreme in all parts of your life. Does it get more difficult to keep taking things further after so many years?

Since I’m nearly 50 years old maybe I’m not able to push it farther just like I can’t physically run very far now. But maybe I’m trying to push it down a little bit darker. I suppose it’s just a difference of pushing forward or downwards. Forward I suppose is a bit more pugnacious and downwards is how to drown people. I suppose when you’re younger you try to pull yourself up. It’s all to do with gravity I suppose. You pull yourself up and you push it out. And then I suppose when you’re older you’re trying to push it down.

“It’s all to do with gravity I suppose. You pull yourself up and you push it out.”

You’ve used fire in your art many times, most memorably in your piece The End of Civilisation where a grand piano burns on the border between Scotland and England. When did that fascination start?

I was fascinated by fire as a kid, of course. But I was also always fascinated by the way that my dad taught me how to light a match. It was very different than what other kids were told. Most people know that if you light a match you are suppose to do it away from your body, but my father taught me to do it the other way, so when it lights you have it right next to your body. I still never worked out why he did that. He also told me to use a knife in the same way, always towards the body never away from it. There is some sort of message in there from my mom and dad, I don’t know what it is. Maybe if you do it that way it just makes you more confident. You know what to do.

Yeah, it is a very Scottish way to approach education, I guess.

What is the most exciting thing you’ve set on fire so far?

Well, the pianos were good, but the most exciting thing I set on fire were my jeans. It was by accident at the Gagosian in New York. I am interested in religion and in voodoo in New York specifically, like a very stupid white man’s idea of what voodoo could be. So I wrote a list of things to burn, some of which are very toxic… At one point I am setting fire to something and I felt my legs getting really warm. I’m trying to look around and my pants were on fire so I tried to take them off. Everyone was like, “Just put water on it! You are such an exhibitionist. You have to set your trousers on fire just to take them off?” This has happened twice already. But the best is yet to come.