Mr. LaChapelle, what did you dream about last night?

I had such a strange dream! I was with a friend at this old stone monastery — I think it was Venice, because it was on the water. There was a lot of white, there were monks and the Pope… I was in this group of all these guys walking with their hands folded and praying and they were like, “Oh, who’s going to be the next Pope?” and I’m thinking, “Well, it surely can’t be me as I’ve done all these crazy photos!” Oh my God, this dream was nuts.

I guess that’s why they call you the “Fellini of Photography.”

Well, I find that comparison much more accurate than to be called “the surrealist,” for example. Fellini is someone I really love! The humor and free sexuality, the Catholic references, the over-the-top characters and narratives that he employs in his work, the old and the new — that was something that I always embraced. The absurdities of life, the wild parties, the bosomy Hollywood blonde or the Italian bombshell, the madness of the paparazzi, the fast times, all those incredible images — like that of a sculpture of Christ dragged by a helicopter amongst the clouds in La Dolce Vita! These characteristics you definitely see in my work, especially back when I was working for magazines, and everything was dramatic.

“My photos were in the beginning escapist, fantasy, they were aspirational, they would take you to another place.”

Is that why you suddenly disappeared from the scene in 2006 and moved to a defunct nudist colony in Maui, Hawaii — to get away from that indulgent lifestyle?

Well, you grow up! I knew it was time to stop. I had 20-something years working for magazines but I didn’t want to get old doing that because that’s nowhere to be. At the point that I did it, I had so much fun with it though. My photos were in the beginning escapist, fantasy, they were aspirational, they would take you to another place — or they were just plain humorous. I was at the top of the magazine world, it was everyone’s dream job who wanted to do that type of photography and I was living that! But I am really happy with the decision I made ten years ago to walk away. If I continued, it would’ve been for the wrong reasons.

Yeah, I didn’t want to stay there because the money was good, because that’s not why I went into photography to begin with. I would’ve continued out of fear, like fear of losing relevancy. I think that’s death to an artist. That’s when you start making decisions that are not truthful to yourself. You’re basically making decisions based on — let’s call it for what it is — fear of losing touch and getting old. It’s obvious, you see it in pop stars getting older, you see it in rock stars, you see it in artists, you even see it in art collectors. There is this need to be relevant.

Have you stopped caring about being relevant?

I just don’t have to worry about any of that! The art market doesn’t affect me because I am not surviving off of solely my artwork because the commercial work that I do enables me to be free and not have to only work for the art world. I’m my own benefactor for art! I just gave myself a Guggenheim grant this morning to start my new series! (Laughs) I’m going to do what I want to do, because I don’t have to sell pictures to eat and to survive. 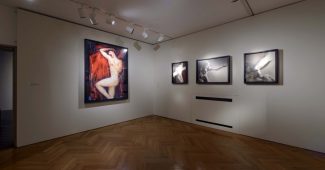 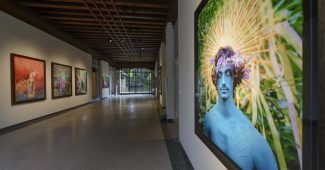 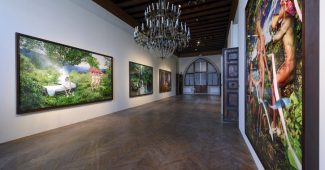 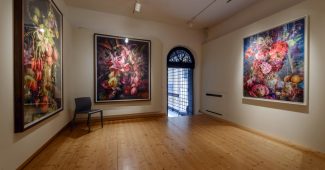 James Cameron said that he makes Hollywood films in order to pay for his deep sea expeditions.

Exactly, I make my commercial work so that I can pay for my art. But people have a problem with that! They think it’s less pure but I think that they don’t realize how many works of art are made for the art market because they worked in the past — they are repeating and repeating and repeating because it’s what sells! If I was dependent on what sold, then I would be making the flowers series, Earth Laughs in Flowers, over and over again, because those sold out immediately.

And yet, there is harmony between your commercial work and your art, as your style is unmistakable. You stayed true to your vision from the very beginning, when your color-saturated photography seemed like a rebellion against the black and white look of the nineties.

It’s how I felt. At the time, the fashion world was very much into grunge, black and white, Peter Lindbergh, Herb Ritts, Bruce Weber. But I was really young when the AIDS epidemic hit New York City and if you survived that, you lost a lot of friends and it makes you question things. So I thought, what did I want to do? Did I want to make some pictures that will inspire people? Or do I want to create more darkness? As an artist you have that choice. And I didn’t want to dwell in that world of darkness and confusion. I wanted to see explosive color because it stood out and was about change, excitement, shiny, happy, funny — and just irreverent without trying to be irreverent.

“Real artists take chances and risks and they don’t worry about the repercussions.”

But it wasn’t all “shiny, happy, funny.” You created some very provocative imagery, like staging Tupac as a slave on a cotton field.

Well, real artists take chances and risks and they don’t worry about the repercussions or the correctness of things. Tupac did not have to ask a publicist if it was okay, because Tupac was an artist. Artists understand things and connect. But, boy, it was super hard to get certain pictures made, it was not easy! Collaborations of any kind are a risk on my part, believe me!

There were some real serious publicity machines going on back then! That’s when it all started, when I was working at Vanity Fair and Rolling Stone — there were some heavy duty publicists out to get me — they wanted to destroy me! (Laughs) Look, if Marilyn Monroe, during her shoot with Bert Stern, had her publicist in the room, we would have never had those incredible photographs of her from “The Last Sitting,” right before she died. If she had a manager there, he’d be freaking out, “Marilyn, your nipples are showing!”

Are you still able to nurture a photographer-muse bond nowadays, or have celebrities become more unapproachable?

Actually, I think it’s gotten better now, believe it or not. With the Internet and with much more imagery out there, people are a lot more open. People like Kanye West, as they’ve gotten older, they understand that good photographers don’t grow on trees, and they want to collaborate with artists that make interesting statements that haven’t been seen before. It’s a really good time for that!But when celebrities start talking about themselves as “brands”— my eyes glaze over and I just kind of want to run back to Maui and sit in a jungle! (Laughs) Like, Oh my God! Fuck it all, let’s make art!

Nick Knight: “I commit with my heart and soul”

David Bailey: “How are you going to cross the road?”