David Doubilet's new book, Two Worlds: Above and Below the Sea is out now via Phaidon.
Emerging Masters
Rolex is proud to support The Talks’ new interview series about the cultural leaders of the future.

Mr. Doubilet, as one of the world’s most prominent underwater photographers, what is it about the ocean that has fascinated you for so many years?

I think it’s the idea that a river runs through everybody's lives, but gathers together and becomes one stream… Water has hypnotized me from a very early time. When I was a child, I had asthma. Some days I really couldn't breathe. I really struggled with it, but when I was underwater, I was weightless, my lungs could breathe freely. That made an enormous impact on how I saw things. And once you have that kind of feeling, almost an addiction to water, it doesn't really ever go away. It was and remains a place where I feel very, very free.

How long have you been making underwater photographs?

Well, I have memories of dives that I've taken when I was 11 years old, and started taking photographs underwater around the same time. They are memories that are difficult to erase. And why would you? And now this is my 50th year in National Geographic magazine. And I've produced over 75 stories for them and spent more than 28,000 hours underwater. It's taken me all this time.

“My favorite picture is the one I haven’t taken yet. The journey is so important.”

What an interesting question. The goal is always not a direct thing, I'm not going to go out and say, “I'm going to make a picture of the largest whale shark, or the most beautiful leafy sea dragon.” That you can't do! The goal is a goal that keeps disappearing over the horizon. It's a life that is never completely fulfilled. That's what photographers are all about. Somebody once asked me, “What is your favorite picture?” My favorite picture is the one I haven't taken yet. The journey is so important.

That childlike wonder and curiosity for exploration and discovery seems to have really stayed with you.

Exploration is very simple. It begins with one of the greatest human attributes, which is curiosity. And my father, who was a professor of surgery at New York University, instilled in me this incredible desire to look into everything, to be interested in things, to be interested in the world. And that's where exploration begins. As a child, I was constantly interested in things, especially in this barrier between the world above, which is known, and the world below, which is unknown. Two worlds. I couldn’t resist that call, it gives you such a perspective of our planet.

And given that much of the ocean remains unexplored, I can imagine you see something new nearly every time you dive.

Absolutely. I mean, one of my goals would be to discover a new species — I’d love to have a shrimp or a fish named after me! But even now, after 28,000 hours underwater, diving is still a thrill, even if I’m seeing something that I’ve seen before. I can look at it and wonder if I’ve ever really looked at it before… I remember photographing a small angler fish in Indonesia. As I watched, another angler fish came up to this first one. They looked at each other. And my angler fish, without seemingly blinking an eye, swallowed the other! (Laughs) It’s incredible, a world where the rules are so different from ours.

Would you say that patience is a key ingredient in witnessing and capturing those exciting and unpredictable moments?

With fish, patience is everything. I mean, I have probably thousands and thousands of photos of the rear ends of fish swimming away! To make a picture of fish is really a question of waiting and looking gauging what they're about to do: is this fish going to spit out its eggs? Is this fish going to mate with another fish? In our brief time underwater, every underwater photographer is always after that moment. And that moment is a product of time, patience, knowledge of how the fish is behaving, and of course, the most important ingredient, which is luck. 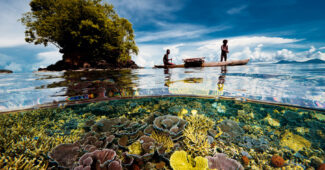 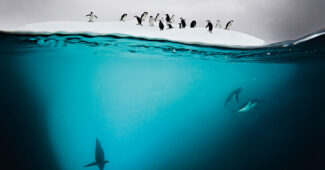 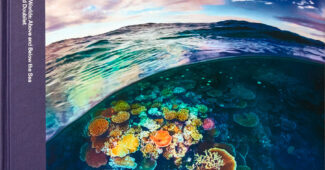 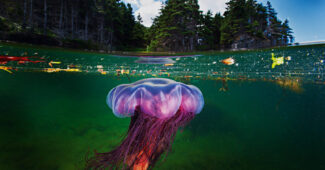 Do you know when you’ve taken an amazing photo?

Sometimes I do! I remember making a picture of two moray eels in the Gulf of Aqaba, and when I made the picture, I came out of the water with my friend, David Friedman, and I said, “I think I took a very good picture.” And suddenly we heard “Stars and Stripes Forever” start playing. It turns out that because we were on the border between Israel and Jordan, the Royal Jordanian police band was rehearsing for a visit from American destroyer — And they were playing that. We started laughing and I said, “This can't be true.” (Laughs) And yes, it was the cover of the magazine.

Your signature style is called the half-and-half photograph, which shows both the world underwater and the world above. How did that idea come about?

I didn’t invent this style of photography but I’ve been thinking about it since I was only nine years old, when I was swimming and snorkeling around the jetties of New Jersey. I would put my head over water and see clouds, lifeguards, the beach, people… Then I’d put my head underwater and I would see silver fish, spider crabs, all sorts of other things. It was like escaping to a world that was dreamlike. Today we use wide angle lenses and a special underwater housing to make these photos come to life. I recently published a book of my half-and-half photos called Two Worlds: Above and Below, with Phaidon. It is an idea I’ve had for quite a while… And it only took 30 years to get the pictures together! (Laughs)

Although your photos have appeared on countless covers of National Geographic and featured in several books, apparently your true motivation for underwater photography is environmentalism.

In that sense, would you say that photos are more important now than ever?

It's very hard for people to understand that this is a water planet, that this is all there is and that we need to protect it. We are, as photographers, making the best pictures we've ever made in our lives right now. We can really say this is in our mind's eye, this is what we saw. Here it is. Printing inks have also in the last 20 years evolved into something spectacular. We can now render the color blue, brilliantly and beautifully. We can bring back that message from the other world. The sad part about it is our world is also changing at the same time. So what we're doing right now is not just making pictures, but recording a time and a place that may change irrevocably in the next few years. And I've seen that.

Where has that effect been the most prominent, in your experience?

Oh, everything has changed, whether it's great schools of fish disappearing, or coral disappearing in the Caribbean. And in the last decade and a half, two decades, it's been a change in climate and global warming. One of the things my wife Jennifer and I are doing right now is a project called Coral Through the Lens of Time; we’re going back to places we photographed in years past, and photographing the changes we see now. Recently for example, Tumon Bay in Guam had several back to back coral bleaching episodes, which is when the water warms up, the algae, the life force of the coral is expelled, and the coral turns white. It bleaches. And unless the temperatures return to normal, the coral can die.

“To say there is no hope in the ocean is a great mistake. There’s always hope.”

And this is happening all over the world, right?

Sure, I mean, look at Opal Reef, one of the great beautiful spots on the Barrier Reef in Queensland. We went back to the exact same spot and we photographed it; what once was a field of brilliant, hard corals is now a boneyard, a graveyard. This is what we have to deal with, and this is why it’s important to have images that bear witness to that change. But, of course, there is resilience, too. Among the reefs that died, we found a couple that were living and flourishing for some reason. They had enough power to completely reproduce the spawn and reproduce corals! So, to say there is no hope in the ocean is a great mistake. There’s always hope.

And for you? Where do you find your hope these days?

The greatest hope that I have is the next generation. Young divers today, they are better divers than I could ever be, armed with more knowledge than I began with! And within that group, there's going to be the next Sylvia Earle, the next Jacques Cousteau, the next Eugenie Clark. The next generation is asking questions like, “How can we change this course we are on?” We’re humans! We have the ability to do anything we set our mind to, we have the ability to change. It’s just a question of breaking through the apathy. That is where hope lies.

Emerging Masters
Rolex is proud to support The Talks’ new interview series about the cultural leaders of the future.
David Doubilet's new book, Two Worlds: Above and Below the Sea is out now via Phaidon.
Related Interviews

Thomas Joshua Cooper: “Preparation is all you can do”