Mr. Humm, you once said that to make it as a young chef, you have to do some crazy things. What’s the craziest thing you’ve done in your career?

My dad is an architect and all my life I’ve had an eye for art. The one thing I was most inspired by in art was minimalism, I am still fascinated by it even today: it’s actually not what you see in a painting but it’s almost what you don’t see. The confidence that that must take… It’s like they decide, “This is enough.” That really fascinated me, so when I started cooking, I tried to cook that way.

I couldn’t! I just couldn’t do it. I always felt like it needs another ingredient, another element, another technique to show off — because I wasn’t confident. To make a name for myself I had to go a little bit crazy even though I wanted to be minimal. So for the first 20 years in my career all I did was add things; more courses, more silverware, more ingredients, adding, adding, adding. Only like three years ago or so I was able to really start focusing on removing and felt confident to do so. Only three years ago I created a dish where for the first time I felt like I achieved what I tried to do for 23 years.

What was the dish?

It’s a dish of celery root, slow cooked. On the plate it’s just celery root, maybe the size of a golf ball with a black truffle jus over top, and next to it you have a white puree. So it’s just these two white circles, and that’s the dish: two ingredients, two circles.

Did that satisfy your vision for minimalism?

Yes but also I felt an incredible weight off my shoulders because all the food that I’d done before felt so out of place. I knew the answer was in this dish. So, then I needed to change everything, every dish had to be like that. And so we did. Since then we’ve created about 110 new dishes with that philosophy and for the first time I feel like it’s really me. We don’t try to be anything else, we don’t try to look left or right, we know who we are — it’s super personal, and that progress has been just tremendous.

What was the first step in that journey?

First we came up with four fundamentals of what this dish does. For me, these four fundamentals are not friends; they fight with each other! It’s only when they’re all together and they’re all friends within each dish that a dish for me is perfect — and that celery root dish, that’s it. So, the number one fundamental: it’s delicious. Delicious is not something you need to think about, it is or it’s not. If you need to think about if you like it or not, it’s not. The second one is beauty.

How do you accomplish beauty on a plate? Is it as simple as good ingredients or an appealing arrangement?

A friend of mine gave me this book a few years ago about a concept called Wabi-sabi, which is a very big part of Japanese culture. It’s something that’s impermanent and imperfect, something that’s natural — that has really influenced the way I think about beauty. So for me, beauty is effortless, almost something that just happened, that just fell from the sky and is beautiful. 10 years ago I wanted my food to look like it took 20 chefs to put it on the plate to show how much work it is and how exact everything is — today I want the opposite. It might still take 20 chefs to put it there but I don’t want it to seem like that.

“I want every dish to have a purpose, a story.”

And the other fundamentals?

The third one is creativity, because I think every dish that we produce has to either have a new combination of flavors, an element of surprise — it just needs to do something. We want to push the boundaries of food, we want to move it forward. And then the fourth one is really purpose. I want every dish to have a purpose, a story. It could be as simple as two ingredients that are grown next to each other, or it could be something of a historic reference, or a childhood memory of mine — but it needs to make sense.

It’s interesting that you chose “purpose” as a fundamental, even though this is something you can’t necessarily share with your guests.

It’s not explained but I think it’s felt throughout. Over time you feel it; it becomes more soulful. I think when you’re younger as a chef you have different motivations, you want to shock people or you want people to pay attention to you… That’s why art is so interesting to study and to take inspiration from because when you look at the minimalist artists, usually their work goes from a lot to nothing. But minimalist art only works if you go through that journey — otherwise it’s empty, otherwise it has no root, no meaning. There’s one artist that has really, really inspired me in terms of minimalism, and that’s Lucio Fontana. But it took me a long time to understand him as an artist. 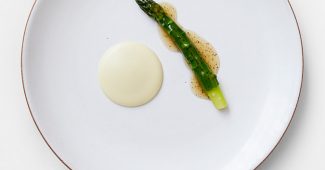 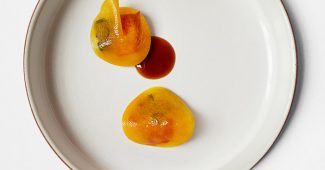 Well, in 2006 when I first moved to New York, he had a show at the Guggenheim. I went with a friend of mine who is very much into art and we stood in front of this piece, a canvas painted black with just a perfect slice cut from the canvas. He’s like, “This is one of the most important pieces.” I looked at it and I didn’t really understand it but I knew that it must be true because this guy knows art. I left and I couldn’t stop thinking about it!

How did you eventually figure it out?

I bought a book on Lucio Fontana, I started reading, started to understand what it was — he wasn’t just minimal, he became minimal and he really challenged what was possible with a very minimal aesthetic. Through art you can learn a lot, and Lucio Fontana is one of the most important for me. In my evolution as a chef, this has really touched me.