Mr. Barber, as a pioneer of the farm-to-table movement, what does it take to start a revolution?

I don’t know what starts a revolution, but it seems to me that a social movement like this needs to start from up high. I mean, look at the white coat I’m wearing. One doesn’t associate $400 meals with revolutions for the masses but if you look back at the history of social movements, most of them were started up on high : the environmental movement, women’s suffrage, equal voting rights… I’m really talking about the future of food production.

Do you think this social movement is working?

I do think it’s igniting. A lot of people are becoming curious about better food — as well they should be. We are now recognizing that in our pursuit of producing ever more quantities of food, we’re destroying the natural resources that produce our food. We have an opportunity to talk about things that are difficult to coalesce around unless you have the resources to do it, and at my restaurants, Blue Hill and Blue Hill at Stone Farms, we do have those resources. I have 35 cooks behind me in the kitchen and I’m blessed to have the view of the farm outside my window.

“What we’re doing is really futuristic. The look and feel might feel farm nostalgic but the challenge for me as a chef as we move into the future is to really change the culture of that perception.”

The farm obviously plays a huge role in your pursuit to eating and cooking local. You spent your formative years working on your grandmother’s farm — are you nostalgic for those days?

People tend to look at the food we’re doing and the kind of agriculture that we’re supporting as nostalgic and it’s probably the most frustrating thing for me in many ways! People will say, “You’re cooking like my grandmother used to cook,” or “You’re farming like my grandfather used to.” No, I’m not! (Laughs) A lot of what we’re doing and a lot of what we’re talking about is really futuristic. It’s borrowing some ideas from the past, of course, and the look and feel might feel farm nostalgic, but the challenge for me as a chef as we move into the future is to really change the culture of that perception.

Let me give you an example of how nostalgia can be problematic. Heirloom vegetables are becoming very trendy right now, and while they are delicious, from a farmer’s perspective they’re very risky: they’re very difficult to grow, they have very low yield, they’re very expensive, and they’re open to all sorts of disease and pest problems and fungal problems because that variety is so old.

So, what is the solution?

Well, for example, at Blue Hill we’re working with a breeder to grow new varieties of cucumbers, ones that have old genetics in them, but that are married with very new genetics for cucumbers that are giving great yield, strong pest resistance, and incredible flavor. They’re also a good deal for the farmer and a good ecological function for the farm. I think there’s a lot you can do with the past but what I think we need to do is move into a food system for the future that can feed a lot of people, but feeds them well with delicious flavors and a lot of nutrient density. And that takes modern science married with some old world wisdom — in that order. 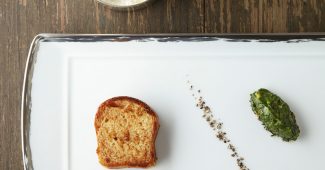 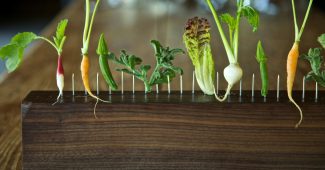 You once said that tension is the area where the most excitement is created in cooking. Is that what you were talking about — the tension between old and new, food and science?

Yeah, definitely. There’s a nice tension because how far do you go with what I’m saying? Do you go into genetically modified crops? Do you go into big machinery, satellite machinery that can pinpoint soil conditions? You can easily take that ethos of technology too far… So it’s a real balance. But I think the tension is resolved through flavor. If flavor is your guide, you will hit the right mark every time. Technology alone will not get you a delicious cucumber. We know that already: the most modern genetically modified crops don’t taste good. Old world stuff has some really good flavors, so it’s that marrying of the old and new that we need to concentrate on.

You seem to approach cooking from a very scientific place. You are always questioning, hypothesizing, experimenting… Where does that curiosity come from?

You know, as I get older, I think I have even more questions. For me, the difference between a good kitchen and a mediocre kitchen is excitement. Where is the excitement? The better chefs are the ones that are the bandleaders, leading and orchestrating that in a way that is inspiring and energetic, and you get to that point by asking questions.

The role of the chef certainly appears to have evolved over the years — today’s chefs have much more authority outside the kitchen. Has that helped give movements like farm-to-table a platform?

A few years ago when I was complaining about not getting some of these points across to our diners, this advertiser friend of mine said, “You have an advertiser’s dream. You have clients that are sitting down in an environment without email, without television, without a phone, and you have a captive audience for three hours. If an advertiser had that, that’s called nirvana.” And that’s right because increasingly, we don’t have time in our day and in our lives where we’re able to do that kind of thing. And that seems like a very real and terrific opportunity. We play a role that is much larger than preparing food: we’ve been given this bully pulpit to speak about things that are of passion to us. And that’s a why it's very valuable moment to be in the world of cooking.

“The difference between a good kitchen and a mediocre kitchen is excitement.”

Can that responsibility also sometimes feel like a burden?

Yes, to be honest with you, it does sometimes feel like a burden but I shouldn’t really be complaining in that I’m sitting in the middle of 80 acres of beautiful landscape, producing food that I’m going to cook with tonight. How can I complain about that? But sure, often I feel like I would like more consistency, to be able to end the evening and then call up a supplier and pick what I want for my menu. But it doesn’t work like that here. That’s the game I’m playing.

The food critic Ruth Reichl once said that your goal as a chef is, ultimately, to change the world. Is that true?

I mean, sure, who doesn’t want to change the world? It’s a very empowering idea. We’re talking about this as a social movement, but I think it’s a nice thing that this is part of deliciousness and hedonism and pleasure. What movement that’s of any value is attached to being greedy for more hedonism? This is a movement that’s telling you to be greedy for the right thing. And because of it, you’ll experience more pleasure three times a day in your life. That’s very powerful. And I think this has just begun, I think we’re headed towards the future.

Anne-Sophie Pic: “I faced the world of cuisine alone”

Michael Pollan: “We vote with our forks”

Niki Nakayama: “Everything about me knows it”