Mr. Green, do you take it as a compliment when a tabloid newspaper like the Daily Mail makes fun of your work as a fashion designer?

(Laughs) I think that season there were three labels that got ridiculed by the Daily Mail. It was me, Sibling, and J.W. Anderson. And it was all “weird” and people were really ripping into these things and the comments from the general public underneath… It was quite funny. It became this weird badge of honor. After that, people were trying to get into the Daily Mail. The next collection I did, I was like, “Shit, it wasn’t weird enough! They didn’t even comment on it!”

What was your initial reaction when your first collection was ridiculed by one of the biggest newspapers in the UK?

I was a bit like, “Oh God… It’s a joke. Everyone thinks it’s shit.” When you’ve just done your first show, you have no money, you’ve just done this big push and then it’s like, “Is this really for me? Maybe I should be doing something else with my life.” Because people had made mockups on TV, like on The Jonathan Ross Show, and then the Daily Mail made a fake one and went around London trying to get into certain places with a big piece of wood on their face. It was the first collection I’d ever made outside of university, I got friends to help, my family was helping – it was very communal – and those people made me realize that it was good to split opinions. That means that it was a challenging thing for people, it made people discuss something. So it was a good thing in hindsight.

And it wasn’t like it was universally panned. Some critics quite liked it.

What kept me going was that people that I respected actually liked it. You don’t have to please everybody. As long as you and the people whose opinions you respect are comfortable and happy with it, then… keep going! Keep making that weird stuff. I feel like there are a lot less people coming out of fashion educations who want to start their own labels nowadays. It’s just become unfashionable or something. They all want jobs, they all want security, they don’t want to take the risk. It’s a shame. 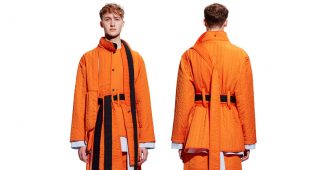 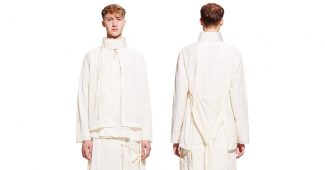 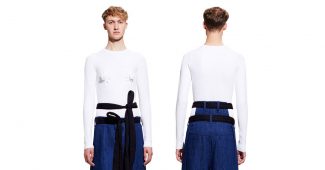 Well a lot of people come out of school with crippling debt nowadays and starting a fashion label isn’t the most sure-fire way towards financial security.

True, I would never have been able to do the MA if I were doing it now. I think I would have had a really different path. I think there will be a big loss of a certain type of creative energy in the next couple years because people are asking themselves, “Do I really want to be in 60 grand worth of debt? And then come out and try and do my own label? With no money?” Just when I was about to start at Central Saint Martins, the fees were still one grand a year. Then I took a gap year and it ended up being three grand a year for me, but now it’s nine grand a year. The change is huge.

Is it true that when you enrolled at Central Saint Martins – which offers one of the most prestigious fashion programs in the world – you had no interest in fashion?

Yeah I didn’t actually know what Central Saint Martins was… (Laughs) I was quite naïve. I studied art in my A-levels and that’s what I seemed to be best at. It was someone in my A-level classes who was like, “Oh, you have to apply there. That’s like the best place.” So I was like, “Okay, I’ll apply.”

“Sometimes not knowing is better than knowing.”

I was a very North London boy that didn’t really know much outside of… North London, I guess. I knew I wanted to make stuff. I wanted to do something kind of craft-based or painting or sculpture. I didn’t realize that Central Saint Martins had such a fashion history.

So how did you end up doing fashion?

I did a foundation year at Central Saint Martins that’s meant to help you decide in which direction you want to go. And a lot of the people on the foundation already knew, they were like, “I’m here to do fashion, to get in that womenswear course…” And a lot of the tutors were kind of deterring people that hadn’t done fashion, saying stuff like, “If you’ve never tried it before, I wouldn’t apply.” So I think with that kind of energy I was like, “Well, why can’t I do that? You can’t tell me I can’t do that!” So I made a terrible dress for this charity fashion show that my friend was putting on. It was awful, but there was something about the energy of everyone there and the energy of the fast-paced, competitive challenge of it that I was quite intrigued by, I guess.

Do you think you have a different approach because you don’t have a fashion background?

Sometimes not knowing is better than knowing. You’re working it out as you’re going along. “Is that how you make this?” And then you make a mistake and realize it’s quite good actually. So, yeah, I guess maybe having that background that wasn’t so obsessed with fashion kind of helped. I never really had any fashion heroes or anything. I first started doing womenswear and then my eyes were opened to designers like Walter Van Beirendonck and people that I started to really respect because of the way they were pushing things. So then I started trying menswear and it made more sense to me. I guess it kind of helps you to approach it in a more open way and you’re not so stuck by these rules or what you know.

After the mixed reviews of your first show that we were talking about before, your SS15 show made quite different headlines. Apparently it was so emotional that it brought some people in the audience to the verge of tears, a very rare feat for a fashion show.

I actually thought it would be a bit of a dark note of a collection because everything is really reactionary. FW14 was really overworked, opulent, and all about multicolored tie-dye cardboard sculptures and hand painting, so the reaction to that season was to strip everything back and have bare feet and monochromatic colors. It was calm, zen-like, and all about movement. But even when I was doing the first run-through with the music and the models that weren’t dressed, I was thinking, “Oh shit, make them walk faster or something!” I thought people were going to be disappointed. That’s how the energy was.

But you didn’t change anything, did you?

We couldn’t! It was like 30 minutes before the show, so I was just thinking, “Oh God, is everyone going to think this is really boring?” But when we saw the movement and heard the music and the flags were moving like they’d never really moved before… It was a weird day. I remember everyone was a bit emotional that morning, I don’t know why. So I felt like there was something, a bit of a weird energy there, but I don’t know if moving fabric and Enya equates to emotion. But it was amazing that people who have seen shows for like 40 years and who have been to all the amazing shows in the past felt so strongly about it.

How do you go on after that, with such enormous expectations all of a sudden?

It was scary. What do you do after that? I didn’t know where to go… But then the next season was just reactionary again. SS15 was very stripped back, it was very eastern, it was very spiritual in feeling, so for FW15 I wanted to do the most classical collection we could. I just wanted to prove that we, as a brand, could make wearable things that people could want in winter. And things that can stand up as design, where it’s not just a floaty piece of fabric and some music.

To create something that is easier for the shops to sell and actually get your products to people.

Yeah, I think the main aim of it was to do pieces that could stand up as pieces in a store against other brands. Like, “That is an amazing coat.” Or “That is an amazing jacket.” “That’s a really nice shirt.” So I guess it was kind of proving to myself and to stores that you don’t need to buy the collection just based on the show.

Iris van Herpen: “I try to stretch the boundaries”

Adam Selman: “You’re not tied to your clothes”