Ms. Smyth, which ingredient are you most obsessed with at the moment?

I’ve got a thing about oysters at the moment! In particular Loch Ryan Oysters. They’re native to the UK and they have a really meaty chickeny flavor. I’ve been trying since before they came into season and I just keep thinking, “We’ve got to do something with Loch Ryan Oysters.” So it’s just a matter of how this is going to come out, how this dish is going to appear.

This might take a while — you once said that it can take you up to three years to design a dish, right?

“Taste everything all the time. Be greedy, test things, taste — because it’s memory. You’re always storing these things.”

You have a good memory for tastes?

Yes! I have a very clear memory of things that grab me and I’ll just store them. And I always tell young chefs to taste everything all the time. Be greedy, test things, taste because it’s memory. So you’re always storing these things, “This is good, this isn’t good, that’s the best bit, that’s not the best.” I’m a very greedy person. I love food, I eat and pick everything, and that’s just building up the bank that you’re going to use in the future. It could be peeling the crispy bit off of the chicken or the bit off the roast potato and thinking, “I love that, what am I going to do with that in the future?”

So the tastes you’ve picked up in the past have as much of an influence on your cooking as the new ones you’re discovering?

I think that your knowledge in the kitchen comes from everywhere and anywhere around you, all the time. Even in terms of technique. I think with any chef, you can see everyone they’ve worked for. I believe in that. You can see the techniques and ingredients and flavors — it’s part of your DNA. It’s your background. I guess if you were a carpenter and learning under Chippendale, there would be certain techniques that you would use that would always be hallmarks of that style. And I think that’s a beautiful thing about food. 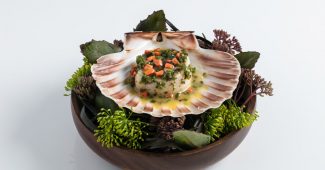 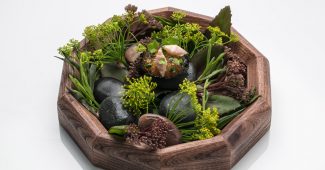 Which hallmarks of your style would you say can be traced back to your mentors?

I think that I followed the influences of the people whose style and cooking I admired. When I went to Restaurant Gordon Ramsay in the early days, it was the best and the most exciting cooking in the UK at that time. Later on I worked with Thomas Keller and Alain Ducasse and eventually I chose to go to work in Le Louis XV because when I set foot in the kitchen, I just knew it was for me. I think you can see all of those influences in the techniques and the flavors that I use: there’s a real purity to the way that we cook and a real natural process here at my restaurant, Core, that always stayed with me from my time at Alain Ducasse. There’s a lot of vegetables and a lot of regional ingredients that I love. Even their ethos and their management styles — that rubs off a lot of the time as well.

Well, I think Gordon had a huge influence on me in terms of the way I conduct myself and manage my kitchen. People might think that’s quite funny, given his television persona, but actually he’s not like that at all! That’s not how he operates his kitchens, and if it was, he wouldn’t be as successful as he is. I remember when I was a young chef, Gordon came up to me just before dinner service and said he was taking the head chef out for dinner and that I would be in charge of the kitchen. I looked at him and said, “Really?” And he said, “If you don’t know what you’re doing by now, there’s a problem.”

How did that play out?

I thought to myself, “I know what I’m doing. I’ve been trained to do this. I know how to do it.” He always had faith in people and let people get on with it. And that’s why he’s had so many people come through underneath him that have been successful in their own right. I think respect is a huge thing in the kitchen, you know, respect for your ability to cook as a chef. 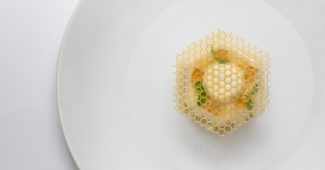 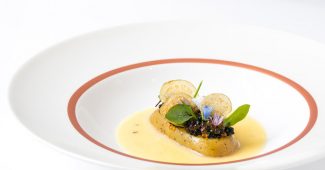 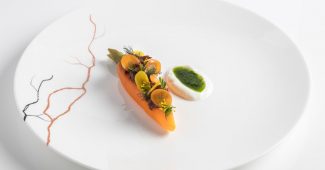 Kris Van Assche said that when you start a new job, sometimes you simply have to jump in and swim in order to not drown — and those experiences are often the most formative.

Exactly, the confidence that Gordon instilled into people and into me as a young chef was really a wake-up call. He put faith in me before I had faith in myself. I think you develop your confidence through those kinds of highs and lows.

Is that something you try to pass down to the young chefs at Core?

I do really try to let all of my team grow. We all have got each other’s back all the time. Loyalty and support and that openness within the team is really important. When you win accolades, that gives you confidence that you’re doing the right thing. But I’ve also been through some incredibly tough times in my career but I persevered and came out the other side. And that teaches you strength, how to handle being put under pressure, it gives you a really good foundation that you can draw from. Experience is a big thing — just knowing that you can pull yourself back up again.

When did you finally realize that you could stand on your own as a chef?

I think really when I became chef patron and started to go out more on my own merits. When I first started creating my own style of food and dishes and getting a reputation for myself that I really came into my own as a chef. When guests came to know who I was and the way I cooked… I wasn’t kind of just working from a formula. It was something else.