Björk, what does it mean to be brave with music?

I think you know when you’re playing it safe, when you’re stagnating, and when you’re growing. It’s probably an ongoing thing for all of us — and a tricky balance. Obviously it’s important to not overreach or you risk bypassing fertile moments, but I do try to learn at least one thing on every album, to reach out in terms of software or growing in my arrangements, or I probably tend to write harder and harder melodies for me to sing. I become my own teacher.

Is that the same as what it means to be brave in general?

I think that’s more of a gut feeling. And then to be too foolhardy can obviously be your downfall. I’ve definitely been guilty of that many times… But it’s worth it. I discovered early on that I’m the kind of person that experiments and makes mistakes but then it’s all worth it because once in a blue moon it hits home. So, in that way, I think being brave also leaves you vulnerable.

“I’ve felt how important it is for young girls that I speak up, that I don’t pretend that it’s easy.”

People tend to forget that vulnerability exists when it comes to celebrities for some reason — is it still scary for you to speak up on issues that you’re passionate about?

To be honest, I find it kind of exhausting… But I also feel that if I crave improvement in, for example, equality between the sexes then I need to make an effort there as well. With my generation, it was important in the nineties for women to go out and do things and stop complaining — but that was only because my mom’s generation had done a lot of work before and I was enjoying the fruits of that.

Your mother was an activist as well, right?

My father too! He was a union leader here in Iceland for decades and is now part of a radical group that is writing a new constitution for Iceland. I think for a long time I probably countered that, I felt it was too obvious. But then in the last 20 years or so, I have made sure I spend a big portion of my time protecting the nature in Iceland. I think any time society goes through transformation there are talks about end of the world, like when London was black with coal, no one could imagine a future without it. When they discovered the sewer system in Paris, it was the same. So we have to imagine a future where we clean the oceans, or go fully solar or wind-powered… If millions can swap from iPhone 6 to 7 in the space of weeks — then we can do it. 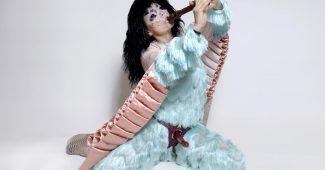 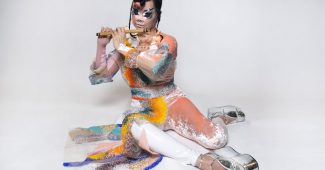 What made you realize your own responsibility in that movement?

I think it is an interesting feeling when you get older and you realize there is no "they,” there’s no government or elders, there’s no one you can point at and blame. You’ve actually got to become that person and it doesn’t necessarily have to be a bad thing. I don’t think it is a coincidence that people my age often get verbal about social responsibilities. For the past 10 years now, I’ve also felt how important it is for young girls that I speak up, that I don’t pretend that it’s easy. And I understand that. Even though what I’m saying now might give me some shit… I am preparing the soil for my daughter.

So it’s important for you to speak up in literal ways rather than solely through your music?

That’s a very good question, and I could answer it in seven different ways… I could easily say that it is not important! Another answer could be that as a live performer I understand and appreciate the power of dynamics and surprise.

If you always express yourself in the same way all your life it might lose some of its potential or dynamite. I have always enjoyed singing quietly and then loudly, I enjoy that technicolor feeling that it gives me. I like cornucopia in films, music, food, sex, everything… So maybe feminism should sometimes be hidden, like "the pleasure is all mine,” the generous self-sacrificial quality of mothers… But then all of a sudden I write a blunt #MeToo on Facebook just to counter it, to give it some polarity? Like a romantic choir song and then a punk tune straight after.

Do you ever worry about not being heard in those instances?

Overall as a musician, I feel heard. And as one, I enjoy being understood and not understood. And I’m willing to live with that. I guess the nature of the music I am making is not necessarily absolute totalitarian inclusion. On the other hand, I definitely sensed when I expressed myself about harassment in the #MeToo project that I was instantly ridiculed — especially when I first brought it up 17 years ago. Women are conditioned to feel that they are unworthy of being taken seriously. Finally, there is a dramatic change in the air now!

“Bravery is this gut feeling to not coagulate or crystalize but to stay liquid.”

You once said, “If whatever I’m saying helps women, I’m up for saying it.” Is that something you still believe in?

I think there is a time and a place because there is a different momentum now. I feel the next task is going to be men and how we are going to create space for them to express their feelings. They have been getting very complex messages: that they can’t be emotional and then all of a sudden grilled for not being so. We women have defined a language for decades now to express ourselves, and the men are very behind in that respect.

Do you think its up to artists to champion those kinds of movements?

I don’t believe in hierarchies — I think we are going to do it all together. This is the time of globalism, the 21st Century doesn’t need leaders. I think everyone has to follow their own mission. Some are more poetic, some more direct. Diversity is everything. Personal politics are complex and never simplistic, and just expressing oneself alone can be a major act of rebellion, a radical force even though it doesn’t include any spelled out politics. Like I said before, bravery is this gut feeling to not coagulate or crystalize but to stay liquid.

How do you stay liquid when it comes to your music?

Well, for example, I did a little falsetto experiment on Utopia; more songs than usual are now sung like that, which is kind of hilarious! It was almost like a continuity of "Cocoon," an old song of mine, where I was trying as a singer to get underneath the skin and break the barrier between the singer and the listener. I discovered that the sonic contrast on this album, the point where the fantasy and the real meet is extreme. I guess that’s what the title Utopia is about. I like that the word has luggage. It is about your fantasy but also about how you mix reality into it, and how you do that is really descriptive of what kind of person you are. I’m curious about the gap between the two. 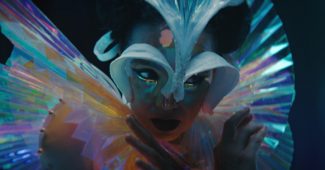 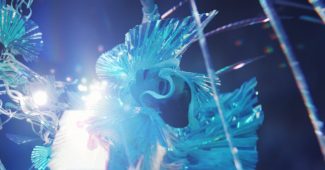 You seem constantly moved by these dichotomies — fantasy and reality, light and dark… On Vulnicura, you sang, “When I’m broken I am whole, and when I’m whole I’m broken.”

Do you hope that your music helps people through those experiences?

I cannot really aim for that. I know that all music has that potential, but it is important that the musician just lets the music be written. It just has to be what it is. It cannot be too planned ahead; sometimes it’s only afterwards that it becomes clear what it is. But before or during the writing process… It’s a mystery.