Mr. van Berkel, what are you reading at the moment?

At the moment I’m interested in Eric Kandel, the neuroscientist. Kandel won a Nobel Prize for his neuroscientific research and he wrote a beautiful book, The Age of Insight where he talks about how in the Viennese cafés knowledge was shared between people like Klimt and Schiele and Freud. That is similar to my thinking. We should have a more global salon, where we can share ideas everywhere with everyone from different professions.

Is your work as an architect also concerned with bringing people together?

I always say that architecture is in the background because what we do as people, how we live, how we work, how we have our daily rituals are far more important. Architecture should support a particular kind of public construct in order to become more of a social machine. For me, the idea of hybridity is a sort of modern interpretation of functionality. If you are able to combine things that are functional with things that are experiential — you make more than just a functional building.

“The image of architecture is not as important as our experience of it, I believe.”

What do you mean by experiential?

Well, for instance, you don’t bring people together in an elevator, because elevators are not so pleasant and people don’t talk in an elevator so easily. If you hide an elevator and use more staircases, you create a nicer space for people — I’ve learnt that people use that quality of architecture more as a way to meet each other more and then talk to each other a bit more frequently. The image of architecture is not as important as our experience of it, I believe.

Is that why your firm experiments with so many different styles?

I’ve always said that you’ll never be able to put me in any stylistic box. Who cares about the box or the blob? I’m more an architect of transitions. I look at artists like Constable or Picasso, and they were highly experimental, they would sometimes work in several phases with different styles. In architecture that’s a little bit taboo, because you need to be recognized, you need to have a “sale story.” But I don’t believe in that. I’m a highly experimental architect.

Have you always been that way?

I was educated by older Dutch designers in the time when I was at Rietveld Academie, a lot of these designers knew a lot of about Dutch architecture and its history. But at the time it was quite rigid and very dogmatic and over disciplined. It was not lighthearted enough, there was no humor. When I went to the Architectural Association, you cannot imagine, there were these experimental architects teaching there at that time. It was so exciting. Zaha Hadid was already there and Nigel Coates, Peter Eisenman was often around, Rem Koolhaas was there, so many architects who later became really well respected, they were my teachers. 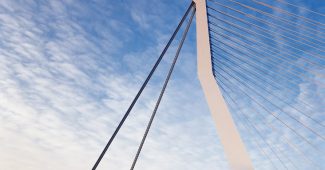 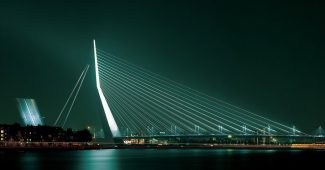 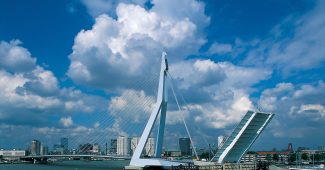 Does it bother you that UNStudio has been criticized for its experimental designs?

I enjoy that! I want to stay experimental. At the beginning people thought the Erasmus Bridge in Rotterdam was too big and it was too dominant in the city… It took only three years and then it suddenly became the symbol of the city, something I never expected. I don’t want to be self-indulgent, but now people even have tattoos of the bridge! (Laughs)

It’s referred to as the “Swan of Rotterdam,” right?

Yes. Beauty is such a difficult thing to discuss — it’s a little bit the same as comparing which color you like with which color I like. There’s no clear image anymore of what is beautiful. I am interested in quality aesthetic culture but for me, there is much more to be found in how you can develop another kind of form of harmony in the building. You cannot fully predict where your work will go to or if it will mean something to people — buildings only grow over time to become iconographic. You cannot design an iconographic building, it has to be accepted by people as such over time.

But you often say that an architect should be clairvoyant.

Well, architecture is slow. Everything we invent today will only be built in five years’ time. You have to constantly know ahead of time where and how we will live or how we will work in the future. The good thing about an “After Image,” the image you retain of a completed building, is that it stays in the mind. If you like the building, you go back to it because you didn’t fully understand it or you would like to really understand it a little bit better, and for that reason I think architecture should have more images than only one image.

I guess that’s what makes the “iconographic” somewhat dangerous — it’s only one representation of a building.

Right, it is too one-dimensional if it is only one kind of powerful image. It should have multiple images and layers behind this predominant visual impact. That’s what all of this is about. The “After Image.” That is for me my most important argument. It’s like with an afterthought, if you’ve ever read a beautiful book and you’re happy with it, that will be a book that you’ll to go back to and read again.

“I realized early on that the permanence of architecture can have such an impact on you.”

Do you think this interest in multi-dimensional imagery has to do with your background in graphic design?

I think I realized early on that the permanence of architecture can have such an impact on you, whereas graphic design is so fast and so related to specific things you might design for. Graphic design had a kind of a mediation and a kind of temporariness. I worked for a Japanese designer who said to me, “If you want to know everything about package design and design in general, then you need to also experience architecture — you need to see the Katsura Palace.” So I did, and that experience at the Katsura Palace was extremely powerful.

The experience was so unicentric. Architecture and landscape and the origins of living were all seamlessly merged into one… I had already studied a lot about how the Japanese introduced their tea ceremonies around the world, how they use these palaces and these ritual codes related to health and the balance of life… That, for me, is so powerful — I thought if I could bring that into architecture then that would be great. That’s the reason why I wanted to become an architect.