Ms. Pic, you come from a family of gourmet chefs and restaurateurs. Was your perception of cooking always a serious one?

Growing up, I was taught that cuisine is something serious and very precise. But more than that, I was also told that cuisine is source of enjoyment! I was very lucky that my father and my mother told me that we eat not only to live but also for pleasure. Of course it was professional, but I was very lucky to see the other side of it as a young girl.

So the kitchen was always a source of fun for you rather than one of fear?

Oh no, at first I was quite intimidated! I initially planned to work in management, and I did a few business courses and an internship abroad. At the time, 25 years ago, it was not like it is today. Now people are open-minded, a lot of young people are starting to work straight from university but at this moment, you were either in a kitchen or you were at school — you couldn't do both. So I really lacked confidence at the very beginning.

“I think that's the way it has to be to come out stronger in the end.”

What made you decide to give up your management courses and return home? Was there a decisive moment?

It was a lot of different things. I started wanting to experience something new, so I left home and moved abroad, but when I did that, I was also leaving my parents and the home that I grew up in — that was a big part of my life until I was 20 years old. It was good for me to leave, don’t get me wrong, but it was also hard for me to be away from the kitchen and spending every day in my parents’ restaurant. My every day was linked with cooking, and suddenly it was not anymore. It made me realize how much I loved it and missed it, and that I could go back and make my own experience in the kitchen. So I returned home to train with my father… But actually, I wish I could have trained in another place or even another country.

Not long after I went back to Paris, my brother, who was the chef at my father’s restaurant, decided to quit so I had no other choice but to stay at home — otherwise there was nobody else to run the restaurant! So it was just not the time for me. But that remains my deep regret because when I lived in Japan for a few years, I discovered so many other cuisines and strange ingredients I had never heard of before! I tasted some incredible food, I experienced new techniques, teppanyaki, all these styles that were very foreign to me at the time because 25 years ago there was not so many Japanese restaurants in France. But in the end, those experiences also made all the difference when I did return home. Plus, it made my father very happy. He was very moved… He cried when told him I wanted to learn cooking, probably because he was taught by his grandmother. She was the first one in the Pic family to cook professionally.

Did the Pic family legacy give you a leg up in your own career as a chef?

No, it was exactly the opposite! I wasn’t very accepted in the kitchen initially. My father passed away shortly after I returned home, so I took over his restaurant. But there were only men working in his kitchen! These men considered that my father was also somehow their father, but because I wasn’t part of the system; they didn’t welcome me as a sister. They saw me as a young kid! Some of the staff was very kind with me, but some were also very rude to me. And my father wasn’t there to protect me — I faced the world of cuisine alone. It was uncomfortable for me. I cried a lot during this period but I think that's the way it has to be to come out stronger in the end. 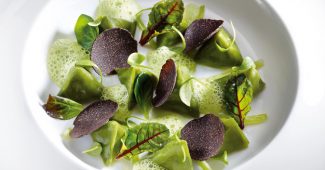 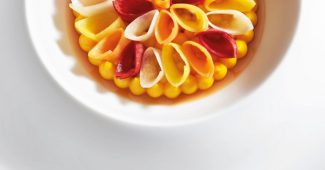 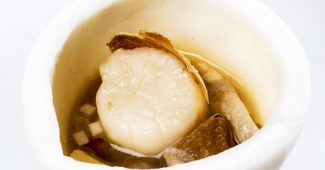 I read that you ended up quitting the kitchen at one point and moving to the front of house and working as a waitress.

Yes, I was a receptionist and then a waitress, I moved around in the different services in front of house but I stayed away from the kitchen — I wasn’t strong enough at that moment to face that. It wasn’t until the restaurant lost the third Michelin star my father had won that I knew it was time to return to the kitchen. That was in 1997. Little by little, things improved. I tried to find my own way of cooking, my own style, and I made a completely new menu.

That must have been a very liberating experience for you.

It was a process based on my own memory, my tastes, my emotions, and my intuition… I had only two stars at that point, so when I set myself on the path to win back the third star in his honor, it was a duty of remembrance.

How did you reconcile the tension between the restaurant’s past and your present and future as its new owner?

Well, that process was a beginning for me, not an end. It freed me and allowed me to accept my relationship to the past. I am who I am because of my family’s history and our tradition of Michelin-starred chefs who taught me to cook. But other things define me, like my own personal history. I think that tradition and innovation are two faces of the same coin; they nourish one another. I knew that we needed to change the restaurant’s cuisine, and accepting that actually gave me a lot of freedom. Since I’m a self-taught chef, there were actually fewer restrictions on what I could do. The creation of the new menu is simply part of my craft as a chef: to give a vision to the world, to provoke emotions through my food… That said, it has definitely taken time but that’s what’s invigorating about this field: nothing is given.

“With time comes pleasure: the pleasure of creating but also upholding the legacy that’s been passed down to me.”

Would you say you’ve finally figured out your vision?

It’s taken me over 10 years, but I think so, yes. My three-star restaurant, Anne-Sophie Pic – Le Restaurant, is my personal playground. Dishes like my berlingots, coquille Saint-Jacques de Normandie, or carotte plurielle are ones that I’m very proud of. My husband and I also started another restaurant called André, which allows us to honor the dishes that made the Pic family famous. It’s a place of history and memory.

Chef Ferran Adria remarked that it is unbelievable what our generation is able to do in comparison to those who came before us.

It’s true that the world of cuisine wasn’t as publicized in the days before the Internet, so getting your name out there was much more difficult. I think that the digital revolution is an amazing opportunity for chefs of my generation: our access to knowledge is just magical, and the fact that we can make our craft of cooking known is such a great thing. But I also think that we often look to the past through a lens of the present, so we forget the boldness that it took to create certain dishes like ones my father was making, you know? I’ve learned that with time also comes pleasure: the pleasure of creating but also upholding the legacy that’s been passed down to me.