Ms. Imhof, what surprised you most about your first art shows?

One of my first pieces was a boxing duel in a club in the Red Light District of Frankfurt, where there was only one rule: that the fighters wouldn’t stop boxing unless the music stopped, and the music wouldn’t stop until the boxers stopped. And what surprised me was that so many people showed up, A — for fighting, and B — for watching it! (Laughs) Because the show was not situated in a cultural environment, it was not in a theater, it did not feel like I was deliberately doing an art piece.

That piece felt like something that was urgently relevant or important, but it didn't feel like I was making art. It was a kind of necessity. Back then I chose to live a little bit outside of Frankfurt in a commune, and I wanted to become an artist, I also wanted to become a fighter — I was doing martial arts training throughout the day — and I was a very young mother. I took every one of these three things very seriously, and it wasn’t without challenges… Having grown up as a queer kid in a German suburb in the eighties and nineties, Frankfurt gave me the possibility to step into some areas that felt without judgement, and with a certain freedom, particularly the Frankfurt club scene and the Red Light District.

“Our abilities and our strengths summed up are stronger than just one person.”

But you were painting, drawing and composing music all the way up to that point?

I was, but in Frankfurt I felt there was an opportunity for me to step out of what felt like a very narrow, constructed path of: you learn something, you get better in your skills, you enter some kind of mastership. I wanted to get away from paper and canvases, and music was a way to step outside of that. For instance, I was mainly experimenting with voice and noise music. This is how the piece, DUEL, came to be. For that, I asked around who would like to join me in creating this performance for my graduation piece, and this is how I met Ian Edmonds, Billy Bultheel, Franziska Aigner, and Eliza Douglas.

This is the core team that you have continued to collaborate with throughout your following shows, right?

Yes, somehow we all met in Frankfurt, and it was, in a very beautiful way, coming together almost as if I was wanting to have a band. (Laughs) This is how we worked together from the very beginning, because we thought, “Our abilities and our strengths summed up are stronger than just one person.”

It’s a little unusual for bands to form in the arts, where individuality is prized above anything else.

And you can feel a lot of solitude and estrangement when you are trying to become an artist, or studying art! There’s always a feeling of alienation, but I felt I could step out of that. It felt very natural to me to enter collaboration in that way, and I experienced it in a very free way. I think that being an artist is a very solitary process, and when I am in the studio, and I work by myself, I might feel the most in my role, so to speak. But when I have a show coming up that has a big live aspect to it, or when I step into the field of dance choreography, for instance, there is a great amount of collaboration happening and I have the feeling that it’s my chance to work with a different skillset. It's humbling over time when you see what others are doing — somehow I try to be as self-determined as possible within that process.

It’s been said that your work exists outside of outdated notions of format and authorship. Is collaboration a way to escape those notions?

For me it was important to find a way in the arts without somehow having to back myself up, or be in a hedged environment. I think my practice is not idea driven so much. Sometimes I think I wish it was! (Laughs) But I don't really believe in great ideas. Instead, I always try to look at what comes my way, which are the accidents waiting to happen, and I build in chance as a point of departure in my practice. And in a way, this is where the collaborative aspect of the work comes in or is felt the most. But later on I also became aware of how important the audience was in what I was doing.

Well, I have had the privilege to do these large scale shows in the last couple of years, and when live pieces like ANGST or FAUST were performed in museums, I realized how much the audience was participating in making those shows happen. In a sense, in those moments, you hand the piece over to somebody else, and then it's not yours anymore; it belongs to everybody, in terms of how they think about it; the audience becomes a part of the decision-making process, and that's I think quite important both for the people who are performing it, but also for the people who look at the piece. 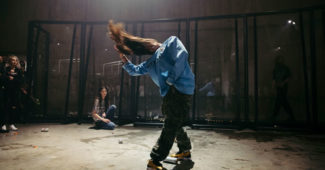 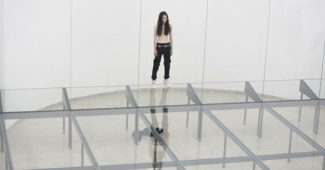 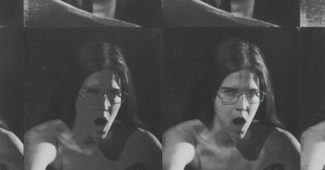 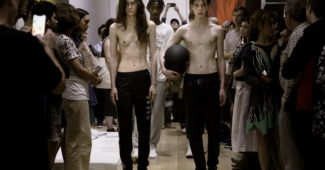 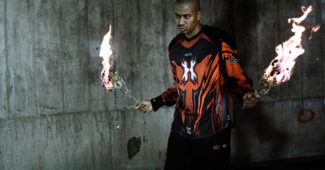 Apparently during FAUST, people would get so close to the performers and record with their phones right in their faces. How do you feel about those breaches of space?

It took me a little bit by surprise, but I think these moments are more a sign of the time right now, rather than something that specifically occurred in FAUST. Pieces of this time are archived by everybody's ability to take pictures with their phones, take them home or put them on different channels. There is, for sure, a moment of access in the work, that is allowing for boundaries to be blurred. And I think what people are feeling is that they are part of a shared decision-making process. There's this zigzag of people watching people perform, and people watching those people watching the people perform. But alternatively, I just had this exhibition opening in Castello di Rivoli in Turin, and because of Covid-19, I was in a situation where the live part was not happening.

And how did it feel without the live audience?

It was a great experience because it made me work a lot more with the paintings and the sculptural aspect of the show. The context was asking me to react to the space I was given, particularly the Manica Lunga, which is maybe one of the most absurd exhibiting spaces in the world. The soundtrack I made for the show was lingering in the space and felt like playing a concert for the paintings… I think the time we’re living in right now longs for community, for being together. However, this might take shapes different to the ones we are used to.

How do you see your role as the director of these large-scale performances evolving?

Well, you kind of get bolder over time. Through all those pieces, I had the chance to work with such different people, in very challenging spaces. But with time you’re also challenged in different way because I’ve only recently gotten to know: what's actually my role? What does it mean to work as a queer, but white, artist today? What is the knowledge that comes with it? How can I position myself in a very large, very diverse art world? There are different constellations of collaborations that I'm entering when I’m putting together an exhibition, but it is also the current context that determines which role I kind of find myself in, right? I believe that one’s voice is a very strong tool right now. And I still try to find mine.