Mr. Kapoor, you are in the privileged position where you are able to make fantastic, elaborate art works that cost a lot of money. Does that mean you have a bigger canvas to work with than other artists?

I don’t think it works like that. I probably am in a privileged position, yes. And cost is always an issue, of course, but I think the bigness of a thing can also be banal. Being big can be meaningless. It’s not the point. The point is that bigness has to be related to what it’s about, the content. I hope the scale of my works is way bigger than what you see. I hope they live in you.

I want to write a grand opera! I want to deal with all the great human issues.

All of them? That sounds quite ambitious.

Of course one would kid oneself to believe one could do that. But what one can do is to allow spaces in the work that don’t exclude the possibilities of death or joy or beauty and all those things. To say, “I’m making a work about joy,” or, “This work is all about death,” is too banal. You just don’t get that. So I think allowing the space, allowing the work, having confidence enough in the process – it’s very process oriented. I’m not really interested in expression.

You are not? Isn’t that what art is about?

I’ve often said that I have nothing to say as an artist. The journey of an artist is a journey of discovery and some engagement with the nature of material, with bodily things and all that has led me to this place. A fascination with red, over many, many years. Red has a terrifying kind of darkness in it. I feel that one wants to open the story and not close it. I want this object to be here as if a real thing, as if a phenomena, a self-evident truth. If I make a comment about some issue, it sort of excludes the possibility of real discovery. Ultimately I go into the studio and say, “I don’t know what to do. I’m lost.” Then stuff arises and it’s the thing in the room that you work with. I’m really interested in that as a process because the process moves you in directions that you couldn’t rationally put there. 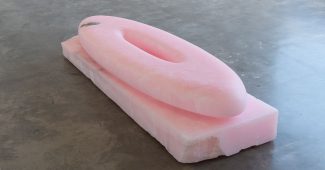 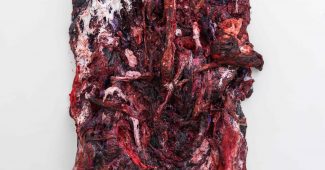 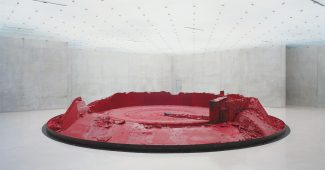 Would you say that your work is introspective?

I always have been introspective. It’s like going to the psychoanalyst, where you lie on a couch and say, “I feel terrible about this,” and then suddenly there is this whole thing in the room and you think, “Look what’s happened, it’s all here!” Even the very big work that I made at the Tate that was called Marsyas. I called it that in a way of course on purpose because it’s the myth of the flaying of the man Marsyas by Apollo. The object itself, this stretched form, is referring to an interior. It’s like a stretched skin.

Over the course of your career your work is striking for the way you use different materials. How do you choose the material that you work with?

I’m very drawn to exotic materials. I like pink marble. It depends on what one is trying to do. I have worked with lots and lots of materials. Vantablack is this incredible new material. It’s the blackest material after black holes. At the moment they can only make it the size of an A4 sheet of paper, so we are working together trying to get the scale up. But a new material brings all kinds of possibility. I’ve been long engaged in the idea of the void object, the object that absorbs all light, which is kind of a non-object in a way. And this material seems ready made for such a thing.

“I hope the scale of my works is way bigger than what you see. I hope they live in you.”

Black is always seen as the epitome of cool. Do you think it may find an application in the fashion world?

(Laughs) This black is so extraordinary, I promise you that you can hold it in your hand, you can crease it, and you can’t see the crease. It absorbs so much light. So you could make absorbent clothing that is hard to see, I think.

Some of your recent works, like here in the Lisson Gallery, use silicon. How did you arrive at this material?

You know I was looking for something that could be more physical than paint, more three dimensional in a way. And I’ve been using this material a little bit for other things and it occurred to me that it would actually be quite a good painting material. So it’s pure process, working from one thing to another. That is what sculpture is, even though these are semi-paintings. They are whatever.

Have you found some material you work with more popular than others?

For instance when you work with steel that seems to polarize people more. Why do you think that is?

Well some people like shiny things, other people don’t. Inevitably. That’s not the reason to do it. It doesn’t matter what people like. I think one has to follow one’s gut, follow the feeling, and then hopefully it leads to something meaningful. If it’s meaningful for me, it’ll be meaningful for you I take it.

Does the same apply for beauty?

Beauty is not something that is static. Beauty is always changing; our concepts of beauty change all the time. They are dependent on the beholder. It is never just one thing. However beautiful a person, a thing, whatever else, there is always that other side. “Oh yes, very beautiful, but…” and depending on the situation, the time… It’s a fragile condition and I think that is the key to recognize. Both beauty and ugliness, beauty and its opposite, are in flux.

I read that when you decided to become an artist you were in a Kibbutz. Was there anything about that experience that made you go I want to be an artist?

No, not particularly. It was a, “What the hell am I doing with myself?” kind of moment. I was a young guy working on a Kibbutz and I was supposed to go to university, but I decided that the right thing to do for me was not that. “I don’t want to go to university. I want to go to art school and be an artist.” I was lucky, I think. I knew that when I was 17 and very lucky to know what you want to do was a great gift.