Mr. Wong, as a chef and owner of the restaurant A. Wong, what do you usually cook yourself for dinner?

When I go home, I'm a very, very simple simple person. I eat a lot of very quickly cooked noodles with a fried egg on top, for example. My wife is from the Seychelles so she cooks a lot of seafood with garlic and rice; simple stuff. The last thing I want to do is fuss. I just want something easy, wholesome, and more importantly, quick.

I guess there also has to be a separation between being creative and innovative at work, and having that kind of comfort at home.

Absolutely. What we do in the restaurant, we purposely try to make it something that you wouldn't necessarily want to eat at home, especially because so much of Chinese gastronomy isn't designed to be cooked at home. We get guests all the time asking to do a one-on-one cookery class to teach them how to make dim sum, like it's something that you can just work together in in five minutes. Dim sum is something which I've devoted 20 years of my life to. It's a skill set which takes years and years of practice. It’s not really similar to Western pastry techniques that you can pick up in a session, you need to enroll in a years-long course. That’s a massive cultural misunderstanding — so the skills I’m using in the restaurant I would very rarely use at home.

A.Wong is the only Chinese restaurant outside of Asia to be awarded two Michelin stars. Has it been challenging for diners to get used to the kind of dishes you’re offering, which are probably outside what they typically are familiar with?

Well, look, there are many people in the world who have never tried a Sichuan peppercorn. There are people from the UK who have never tried dim sum. And it's not for us to pass judgment on them. It's for us to celebrate that incredible part of Chinese culture, and share it with them. What I take pride in the most is the fact that we're using our restaurant to inspire Chinese culture. We're bridging a gap between these two cultures. And actually, the harshest critics of our restaurant are normally people of Chinese origin, because I think they don't really understand what we're doing. They go, “Well, it's not like the food that we eat in Hong Kong or Singapore?” If that's the food that you wanted, you should never have come to our restaurant to start with. There are 16,000 Chinese restaurants in the UK alone. If you wanted to have a black pepper beef dish cooked in the way that you have it a Hawker stall in Singapore, you should have gone there. What we do isn't about that.

That’s interesting — it seems like there’s a balance between too authentic, and not authentic enough.

Authentic means something very different for different people. Personally, I have a very kind of open interpretation or anthropological interpretation of what one perceives to be authenticity. Something that I try to address with a lot of our guests is this idea of authenticity and what they perceive it to be and the reasons why they hold on so strongly to certain ideas. It’s more counterproductive than anything; there's nothing to be gained from sitting there constantly beating something with a stick going, “It's not authentic, it's not authentic!” 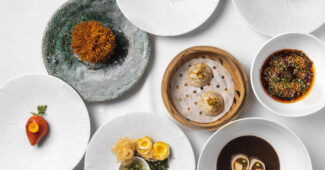 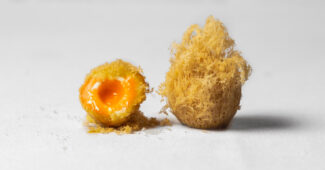 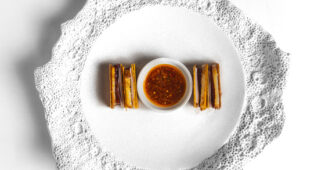 Plus, if everything just stayed authentically one way, there would be no innovation or forward progress in gastronomy at all.

Exactly. I'm a big advocator of the fact that authenticity is fluid, you know? Today's innovation is tomorrow's authenticity. I grew up in the eighties where the only thing people knew about Chinese food was sweet and sour pork. That was literally it. The general understanding of Chinese culture was so primitive. Now I go into the local Chinese supermarket, there's so many different cultures and people who want to buy instant ramen, bubble tea, frozen dim sum. And to me, that really encapsulates the fact that times have changed. And I think without chefs and artists and poets and writers who try to push the bar, then people's perception of China and Chinese culture within places like the UK will never change. And I think that is very dangerous.

You’re certainly doing your part in that respect: your front of house staff works to educate your diners about where ingredients and techniques come from, and why dishes were made in certain ways.

I think people really enjoy it! It's about using our food to inspire culture, and sharing stories of ingredients and history through our menu. And if you understand that, then I think that you will enjoy our menu.

(Laughs) You know, I’d never actually heard of this book, but it was recommended to me and it’s just great. There’s a section where the author talked about being a banquet and someone gives her this dish, which is apparently vegetarian, but it looks and feels and tastes exactly like meat. And you have to remember this is the Ming Dynasty, right? So you're talking about, the 1400s to the 1600s. At that time, it was really ingenuity at its peak. And that really was inspiration.

“Travel is a very important part of anyone’s growth. There’s no book in the world, no podcast, no Anthony Bourdain episode that can ever replicate that life experience.”

How was it for you to travel around China several years ago and really hone that deep knowledge of your culture and heritage?

I think travel is a very important part of anyone's growth. When I went traveling, that really was probably the first time I went into China, by myself in a working environment, and got a firsthand experience of this idea of originality. There’s no book in the world, no podcast, no Anthony Bourdain episode that can ever replicate that life experience.

That was around the time you were planning the concept for your restaurant, right?

Yes, my parents opened a restaurant in Chinatown in 1985, and that space is what eventually became A. Wong. It’s really sentimental because their restaurant was very much an integral part of our family life, we spent all our after school times here, all our holidays here… But I primarily went into the industry myself because while I was at university, my father passed away so I came to the restaurant purely just to help out. It was never really a career choice that I'd imagined getting into. But I kind of fell into it, and then once I had fallen into it, it's something that I've embraced, that I surprised myself with how much I enjoyed it. It was just a family commitment, and everything else that happened from that was actually very unexpected.

Maybe it’s even better that you never intended to fall in love with this path, there’s much less pressure that way.

I think so. Throughout my whole career, I've never really put pressure on myself to make massive goals on what to expect. I’ve just been very fortuitous, and very lucky, and of course I’ve worked very hard. But all I ever set out to do really was create a restaurant that I'd like to go to, to create a restaurant with my wife on a site that I grew up with. Every day from that point onwards, it's very much been about doing things to the best of my ability. My father used to say, it doesn’t matter what you do, just try to be the best at it. And that's kind of like a mantra I've taken through hospitality through the evolution of this restaurant: just try my best to be the best that I can.