Andreas Deja's new film Mushka is in production, to be finished at the end of 2021.
Emerging Masters
Rolex is proud to support The Talks’ new interview series about the cultural leaders of the future.

Mr. Deja, as a long-time character illustrator and a former supervising animator at Disney, what has the evolution of hand drawn animation looked like?

Well, with the old process of animation, everything had to be drawn on paper, of course. And with hand drawn film, you need to do at least 12 and sometimes up to 24 drawings per second of animation. If you had a drawing on paper, it was then transferred onto cellulite sheet. When I was working at Disney in the eighties and nineties, there was an ink and paint department which was quite large — they would take the cell, put that on top of the drawing and ink it. And then they would take that cell, turn it over and put flat paint on the back.

It was very elaborate! Eventually it all got moved to a system called computer animation post-production. They were actually able to take our handmade drawings and scan them, then they will become a file on the computer, you can call them up on your screen! It became a lot faster, but it also helped to bring the cost down tremendously. The next change was that even the drawing process was made digital… These days you can do a 2D animation with a Cintiq and a stylus. I’ve tried that but I really missed the contact you have between the rough surface of the paper and a pencil. If I’m drawing on a piece of glass, my line is completely different.

“When you push the button to finally see the animation take place, to see it come to life… I still get that flutter in my heart.”

Have you always been the type of patient person who can happily undertake that kind of project?

I knew that this was the process from the get-go. I found out as a child just how much work it takes to animate a single frame. When you push the button to finally see the animation take place, to see it come to life… I still get that flutter in my heart… It’s worth it. I miss that touch, you know, because the hand-drawn process has really gone out of fashion.

Apparently Disney used to bring, for example, a real life lion to the studio so that you and the other animators working on The Lion King could study their movements.

All that research that has to be done before you start animating, and that stuff was fascinating. You have to gain the knowledge somewhere, so we also brought in actors to study, including bodybuilders for the role of Gaston in Beauty and the Beast, which was pretty funny. I remember for The Lion King, we tried to go to the San Diego Zoo, we had special tours booked but when it’s a hot day, the animals usually sleep and you don’t get the motion that you need to study. We watched National Geographic specials on lions, of course, but having the lions at the studio gave you a completely new sense of how big they are! We had a cub that was only a few months old, we were drawing him right there, there was no fence or anything, just a trainer with a leash! (Laughs) At the end of all that, we really had a new respect for these animals.

Do you think those live references will always be necessary for successful animation?

I think so. I think if you want to have a believable result, there might be some superstar animators who can do it themselves… But for me, I need these references. I use YouTube a lot these days for Mushka, the film I’m working on now, and I know at Pixar they will often film themselves going through the same motions as their characters in order to study them. The thing is that with Disney films, the character animation was and still is very important; you can see the emotions coming through, the drawings really come alive. 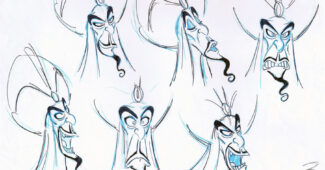 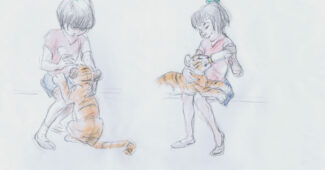 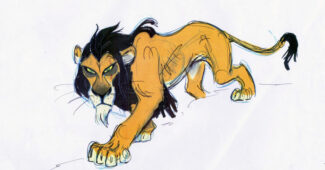 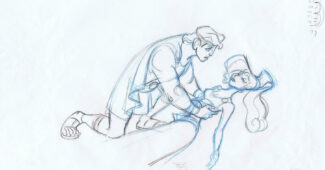 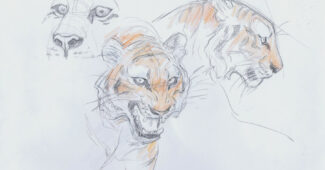 How do you go about achieving that?

Any actor will tell you the same thing: you have to understand your character from the inside out. When I started at Disney in 1980, I remember Ollie Johnston, one of the original animators who worked right alongside Walt Disney animating characters like Baloo the Bear and Bambi… He told me that you don’t animate drawings, you animate feelings. So I took that to mean that when Ollie sits down to draw something, he’s really thinking about: What did the characters do in the previous scene? What's happening in this scene? What is always the character feeling in this scene? And why does he feel that way? Top talent doing the voices is also crucial to bringing a character to life, especially a villain.

Apparently when you showed your sketches of Scar to Jeremy Irons, who provided his voice, he was surprised to find that Scar actually looked a bit like him.

(Laughs) Right, and when I got assigned to Scar, I looked at some Jeremy Irons movies and some stills and started his face… He’s got these dark circles under his eyes, you know, he smokes, and so I said, “Let's give Scar these same dark circles.” There’s a certain mouth configuration that Jeremy Irons also has when he speaks that I tried to also capture with Scar. In the end he is sort of a caricature of Jeremy Irons! And that sort of process in using the voice actor as a reference can also help to bring out your character’s voice and emotion and look. You can go really stylized.

Which emotion would you say is the most difficult to animate?

It really has to do with the degree of realism. When we're dealing with a princess or a prince type character, those are really really hard because you're dealing with subtleties, compared to someone cartoony like Roger Rabbit, who I also animated, because there’s so much more you can do! You have much more freedom. But for someone like Belle or Aladdin, the emotional changes lie in something as subtle as an eyebrow raising or a blink. Realism is the tough part.

“It’s always about story and characters. That’s the most important thing, to tell a good story. And that’s what I hope will stay.”

On the other hand, too much realism can also be detrimental. Watching the new CGI-based Lion King films, I really missed the very expressive faces that the hand-drawn process gave us in the original.

I had the same reaction. I didn't see the whole film, but I saw all the trailers and clips. It almost looks like National Geographic footage or something. You cannot have the human range that we had in our drawings because then it would ruin the realism. So, they’re a bit trapped by their own rules in that sense.

Do you worry that the rise of CGI means the end of the hand drawn era?

I wish I could say Disney will do something fully hand drawn again. I wish I could say it’s in the process, it’s coming out next year! It isn’t. But still, hand drawn animation continues to be big in Europe right now, and I myself have decided to stay with it. So rather than staying with Disney after 30 years and doing work on these CG films, I realized I have nothing to add. It didn't call me; that medium doesn't need me. So I just started to do my own projects because I still have stuff to express in this medium. Whatever the medium though, it’s always about story and characters. That’s the most important thing, to tell a good story. And that’s what I hope will stay.

Emerging Masters
Rolex is proud to support The Talks’ new interview series about the cultural leaders of the future.
Andreas Deja's new film Mushka is in production, to be finished at the end of 2021.
Life