Andre, how many times have you drawn your famous graffiti tag the long-legged Mr. A?

When was the last time you drew Mr. A?

Today. Look at the color on my fingers. I don’t do it as much as I used to, but I still enjoy it so much. It’s the thing that gives me the most pleasure and what connects everything I do.

How did you start doing graffiti?

When I arrived in Paris I was ten years old and I couldn’t speak French. I had to find my way so I started to draw a lot, which I was always good at, and when I was thirteen, fourteen years old that resulted in me starting to do graffiti.

Which was pretty early on in terms of graffiti culture.

It was the really early days of graffiti in Europe, so it was a really fun and a very rich moment for graffiti. We had to invent our own style because there was no internet or anything like that. I came up with Mr. A, a character, which was kind of new at the time. Graffiti was all about letters, but not so much about a figure that could talk to everyone.

By now you have put your trademark Mr. A all over the world…

For a while doing graffiti was my life. I traveled to so many different cities. And doing graffiti was an amazing way to discover a place. You went out at night to paint, you got lost, and you had to find your way home by looking at the graffiti you did and going back along them. 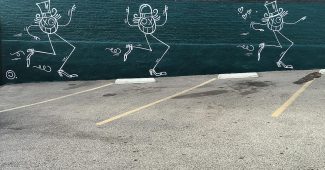 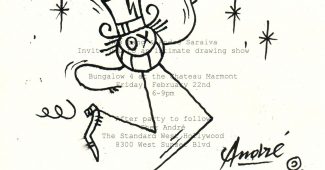 Do you have any favorite spots that you’ve painted?

Some of the billboards I painted were amazing. I painted the Gucci billboard you can see from the pool here at the Chateau Marmont in LA. Nobody had ever painted this one before. That was three years ago. I also loved to paint billboards and rooftops in Tokyo. That was very exciting. But sometimes a small graffiti would give me more joy than a huge piece.

Has the attitude towards your graffiti in the public space changed now that people know who you are?

No, I still get a lot of shit! Especially in America. I’m not worried about going to jail, I’ve been to jail. But they would kick me out of the country and you are never allowed to come back. It’s happened to friends of mine.

Now you have all kinds of lucrative business but how were you able to finance to travel around the world earlier on?

Well, I was able to make a little money off my drawings sometimes, but you know: love and fresh air would keep me happy. When I was hungry I went into a supermarket and just took what I needed. I was kind of “free spirited.”

True. I like to stay in nice places, but I don’t really own a house. I don’t have a car. I like people more than I like things.

How has graffiti influenced the things you do now? You own several nightclubs and a hotel, you’re the creative director of a magazine, you collaborate on projects with designers, and you put on art exhibitions.

Where do you find the time to do all of that?

I don’t sleep a lot and I don’t like to go to bed early, so I have to find something to do at night. And I like the things that keep me busy.

You just take things as they come?

Sure, I’m kind of easy. I’m forty now and I still have the life I used to have when I was fifteen, just on different scales. I live day by day. And I have great people I work with and nice people I am surrounded by, which help me a lot.

Opening a nightclub is still not really what one would expect from an artist.

I was always very related to music and I would organize parties, raves, and concerts in Paris. Paris was kind of slow at the time. Besides some good parties the clubs were all run by, and are still mostly run by, the big rich and famous. The music was stupid commercial shit. We wanted to have a place were we could listen to our own music and have our friends come, a place that was not ruled like the other places were ruled. That’s how Le Baron started.

When did you first start going out yourself?

I always painted at night and what’s happening at night is bars and nightclubs. When I was thirteen or fourteen I used to go to Les Bains Douches, which was a nightclub in Paris, and sleep there until they kicked me out. Then I would take the first train at six o’clock in the morning. So that was my first relationship to nightclubs.

What are the main ingredients for a good party?

The most important thing is the people and the music. That’s even more important than the place. You also need booze and pretty girls – pretty but not only pretty. They need to be interesting, a girl who likes to talk, who teases you a bit. And there must be a moment of freedom.

People should feel at ease.

True, most of the clubs are not free anymore. They are full of rules. They have VIP areas, which is such bullshit. Once you’re inside a club you should be able to do whatever you want. I’m not here to judge you. You’re judged all over the place and we have rules all over. Take it easy.

Some sort of excess is usually a good ingredient as well.

I always felt that at night I could be who I really wanted to be. People are more open and generous. The night has always been the place in which I feel good. For me the night is not a time, it’s a place.