Ms. Roš, what are the main challenges in Slovenian cuisine today?

I think Slovenia is slowly, slowly stepping on the world gastronomic map. But my generation of chefs needs to fight for every single step, and every decision is opening a new door. If you work in Italy or Germany, and you cook well, sooner or later you will get the recognition that you need — there is the Michelin Guide, there is Gault Millau, there is the L’Espresso Guide. While in Slovenia, you can be really good, but up to the moment when the international community acknowledges you, you are actually no one.

You have been the head chef of Hiša Franko in Kobarid for almost 20 years — and it wasn’t until this year that you were recognized as the number one female chef by the World’s 50 Best Restaurants academy.

Right, it’s a very, very slow process. Everybody travels for food to Copenhagen, London, or Paris, but who knows where Kobarid is? So it has been a long, long struggle and fight. It doesn’t have only to do with the quality of the restaurant; you have to prove that you are worth certain awards three times more than in developed countries.

“Creativity is something that does not come only from our childhood — it has a lot to do with our own personality.”

I guess the former Yugoslavia doesn’t necessarily come to mind as a haven for creativity in fine dining. What was it like growing up there in the 1990s?

Well, my mother was actually a brilliant cook. She was a journalist and a very creative person, so our meals at home were very colorful and never repeated. But if I think of the food from my childhood, I think of a simple pasta dish with homemade tomato sauce. It really was a super flavorful meal, with a drop of olive oil on the top and with no cheese. That was the most loved meal when I was a child! That is what they call, “happy food.” You know, my children would kill for it.

My parents lived through the communist regime and told me they used to get so excited over simple things like bananas because they were so rare.

Yes but you know, Yugoslavia never had a very strict organization of the country — the borders were open and we could travel. Tito was a “bon vivant” and he was letting his people have a pretty free life. So Yugoslavia had a lot of good things as well. I think Yugoslavia was a place with a lot of creative people; culture was super strong, especially in Zagreb and Belgrade. But I think that creativity is something that either is in a person or is not. Let’s say I have two children and they are both raised in the same way. The girl is super creative and totally irrational, while the boy is totally rational and not creative at all. I think it is something that does not come only from our childhood or from our upbringing or from the regime in which we lived in — it has a lot to do with our own personality.

Do you feel more creative and irrational, or the other way around?

Oh, I’m too instinctive sometimes! You see, my problem — and sometimes it is also a good thing — is that I don’t question a lot. I actually just jump in the water and swim and I am a kind of personality that is never happy with average results. At Hiša Franko, I never questioned myself about how it is going to be like, especially because I never had any prior experience of seeing how a restaurant really works and I’m completely self-taught so it was like a total experiment and we are still making corrections.

You learned things the hard way?

Absolutely. I believe that if you don’t step on a bomb which then explodes, you will always think you are right! When I took over, we needed a full restaurant at least seven, eight months per year to be able to survive, to renovate this old building and to keep the family traditions alive. And because the quality was the only way to fill up the restaurant, it was a real struggle. But when you are at a cross-roads, mistakes can help you decide the right way forward, and I think I really grew when I understood that I need to accept my mistakes.

For instance, 10 years ago we had a Slovenian food critic in the restaurant—we were his favorite restaurant for years! And then one day he wrote a review that wasn’t brilliant anymore. He said, “I think she’s not stepping it up. I think she doesn’t know what she’s doing.” I was like, “What the hell is that? Fuck him. He doesn’t understand.” But after two days, it was eating me up inside! I read the critique again, and I started controlling my food sources and my team. And I understood that he was totally right. I think the best chefs in the world are those who are open to criticism. I also think that doubts are the engine of the progress. It’s important to doubt!

Have you ever had a moment where you wanted to give it all up?

Of course! (Laughs) When you are so tired that you look at yourself in the mirror and you say, “Why on earth am I doing that?” You know, running a restaurant like this, without investors, without partners — to fight this game alone is actually every day a struggle. Sometimes you are not in the best shape. And sometimes, you cannot afford to have enough people to do the work, and your effort is doubled or tripled. The biggest thing is that you must find in it a personal happiness.

Chef Eric Ripert said that Buddhism helps him run his kitchen in a non-stressful way. How do you set those boundaries for yourself?

I am still in a learning process about that, because if you are unhappy in your private life, you can’t cook well. I think more and more chefs are realizing that. A lot of chefs say, “Until 10 o’clock in the morning, I am not available for anyone. Not for an interview, not for cooking, not for anything.” Restaurants are shortening up the kitchen timetable. The new generation is fighting hard to make our own lives better. 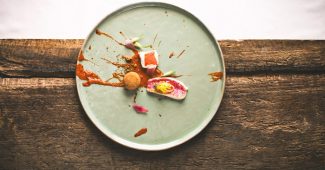 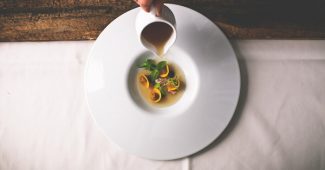 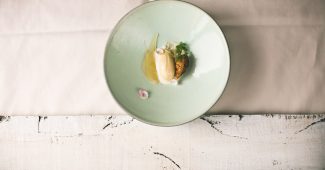 It seems that the new generation of chefs is also much more competitive. Does that ever affect you?

You know, this is the problem! This is why little countries like Slovenia are not able to build their own community: because chefs here think that cooking is a competition. I don’t believe in that! I think the intelligent chefs are far from being competitive with each other! I cook in a totally different way than Mauro Colagreco cooks and have a totally different philosophy than that of René Redzepi. So how can you objectively compare the two kitchens? If I call any of my colleagues around the world because I have a doubt or a question, they would always answer.

So you don’t worry about protecting your recipes or your ideas?

Well, for example, we have a beautiful dessert at Hiša Franko, it’s a very fermented kefir with pollen and forest honey ice cream and walnut meringue — almost like baklava. This dessert is so typical for me, my way of thinking! And then someone told me that he has visited a restaurant in Ljubljana, and the dessert there was actually constructed the same way! When I discovered this, I was like, “Ah, that’s wrong.” An intelligent chef would never copy and paste your dish. But in general, I think everyone is there to have a good time cooking and sharing ideas. And these kinds of moments are really special for personal growth.