Ms. Roman, your recipes always feel very “you.” As a chef and the author of two best-selling cookbooks, how do you ensure that your recipes achieve that?

I've thought a lot about that because people have said that before, “Oh, I'll read a recipe and know it's yours before I see your name on it.” That's the best compliment because I feel like working with food is such an extension of my personality. I don't have me, and then my job. With my recipes, I appreciate that people can see my personality in them, and I tried to figure out what that means exactly, but I don't know. It's nothing that I tried to do. Of course, there are certain ingredients that I use a lot of like lemons and herbs and chili flakes and garlic. Those are very common ingredients, but I try to use them in a way that’s different or exciting. I just cook what I want to eat. And how I cook for myself, my friends or family is what I write down and have other people cook. It’s a very natural and organic extension of my brain.

This is a bit of a unique experience because the average person going to a restaurant isn’t necessarily familiar with the chef whose food they are eating — whereas most people who cook your recipes have watched your videos on YouTube and know your personality.

It's definitely easier when you're on multiple platforms and channels. People can get to know you through your writing or through your your videos or through your food. Another great compliment is if somebody meets me in person and says, “Oh, you're the same person that you are everywhere else.” There’s no disconnect! And so while I am definitely not for everybody, I am consistent. And I think that that's easier to pick out.

“Especially in food, most of what you see is aspirational, and it is perfect. It is like exactly what you’d want it to be in your dream version of something. But it’s not real.”

Your recipes and food styling have been described as “perfectly imperfect.” Does that resonate with you?

(Laughs) Yeah, for sure. Especially in the food and lifestyle space, most of what you see is aspirational, and it is perfect, and it is styled, and it is on point. It is like exactly what you'd want it to be in your dream version of something — not a thing out of place. But it's not real. And I am just so obsessed with documenting things that are real and that are really happening. I mean, thank God I'm not a fitness influencer or something because I feel like I would have such a tough time being like, “Yeah, and you only do 20 minutes of workout a day, eat whatever you want.” Like, is that real?

Apparently this was a big consideration when writing your first cookbook, Dining In. You styled everything yourself, but were worried that maybe it didn’t look professional until you came to a realization that you’d rather it be yours than be perfect.

Yeah, and that's still the case with everything that I do! My favorite shoots were always the ones with people cooking and living, and then people just taking photos of it. And I felt like that was really important to me, especially for the first book. I wanted the food to look like how you would make it. I feel like that's part of the trust that you build with a reader: if I give you five recipes and you cook three, and they don't taste good, or they don't look good, or they look nothing like the photo… Are you going to want to do the next two recipes? Probably not. I think the more you can show what’s really happening, especially with food, then people try it and they can actually have success.

Is it also important to normalize imperfection? In your videos, you have unabashedly shown yourself burning short ribs or getting a cake stuck in a tin.

Definitely, I mess up all the time and I think it’s important to normalize that. I didn't want to burn the short ribs. But I did. And I'm not going to cut it out or film it again to make it look like I didn’t do that. If you're only ever shown the correct outcome of something, and you don't achieve that, it's really challenging to feel confident in your ability to move on. I feel like if you're watching someone like me burn stuff sometimes, when you do it, you're not going to think that there's no hope for you. And I think that that makes you feel so much better. I feel like that's also why we're obsessed with like pictures of celebrities in their sweatpants when they go to get coffee, you know, “Oh my god! Stars, they're just like us!” 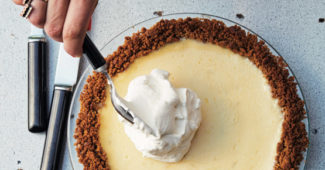 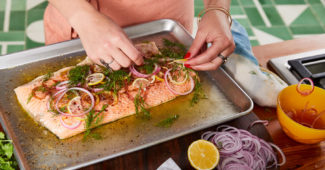 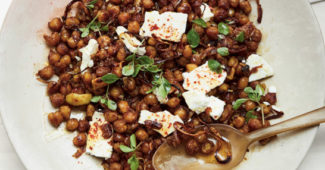 How have you experienced adapting to your own authority as a chef? Did it take some time for you to feel comfortable writing recipes and saying this is the way to do it?

I think that I sort of had this wave where I was like, “I think this is the best way.” And then that kind of mellowed out and now I would never make that claim anymore. I think that that has also just like a lot to do with maturity and getting older. These days, I don't think when it comes to cooking that there is a best or an only. I don't really want to be considered an authority or an expert anymore, I really just would like to be considered a champion and an enthusiast of home cooking. My main concern is not that people do things correctly all the time, but that they have a really good time doing it.

The other problem with being an authority, or even just having one of your recipes become a viral success, is that it opens the doors for everyone to start questioning your methods or whether the recipe is really worth the hype.

Yeah, for sure. That happened with my chocolate chunk cookies where it caught and it became really popular and that was so cool to watch until people were writing, “Is this even that good?” or “I tried this and here’s my version of what I think needs to change,” and it’s like, “Okay…” I've been the subject of people's opinions for years! “Why are you doing that? Don't cook with your rings on! Why is your hair down? Your voice is annoying. That's not how you should cook that ingredient!” I've heard it all. But now it's kind of funny to me. And it’s another reason why I've pivoted to being like, this isn't the only way or the best way, this is my way. But yeah, it is funny that with anything the media writes about favourably in any sector, in any art form, in any medium, it’s like: it’s great, and then it's like, do we even like this? Is this even any good?

It’s a bit of a double edged sword because you can’t exactly wish that your recipes were not popular.

I mean, I definitely had some moments where I was like, “I wish this would never have been born.” Then the backlash wouldn't have been there! But it's a weird thing, and you don't really have control over it. It’s so classic “Internet” to take this good thing and dissect it and make it not fun anymore… So I just can't pay attention to that stuff anymore!

“If you're writing just for yourself, it's very clear that there's no assignment. The job is still a job, but it's shifted to: this is what I feel like eating this week.”

Do all of these experiences make publishing recipes more personal for you? Is it more of an act of vulnerability?

Yeah, absolutely. But I think the vulnerability part has really kicked into gear since I went out on my own with my newsletter. Now that I'm not writing for a publication anymore, I can kind of do things on my own terms. If you're writing just for yourself, it's very clear that there's no assignment. The job is still a job, but it's shifted to: this is what I feel like eating this week, or this is what I felt like cooking this week. When I left Bon Appetit, I went almost straight to the New York Times; but now I’m really doubling down on myself, which can feel really scary. Like, do I have what it takes to like shine as bright on my own? I've established now that I can make my rent — and before that was my only concern, can I pay rent? And now I'm sort of like, can I build a business?

It must be easier to stay true to yourself or protect your ideas now that you’re working for yourself.

This whole idea is something I talk about a lot in therapy because I’m obsessed with originality in a way that is probably unhealthy, to be honest. Do you know anything about the enneagram types? I’m a type four personality, which is called The Individualist. I just really appreciate originality in every art form and I don’t believe people when they say there are no new ideas. It’s not about an idea, it's about how you’re injecting your personality, your soul into something. I love when I read or watch something and feel like it can only come from one person who is creating something unique for the world. That kind of artistic integrity is just really important to me.