Alexander, is it true that you started Edward Sharpe and the Magnetic Zeros once you got over your drug addiction?

It’s the opposite actually. I told the correct story to a newspaper writer but he did not want to hear that. I guess he thought it was a better story that when I got sober that I started writing these songs. Ima Robot, my previous band, was the obnoxious, sober me, when I had my intellectual phase. With Edward Sharpe I was trying to get out of that.

I think the story is better this way.

I was just done being sober. (Laughs) It’s a bit of an intentionally provocative statement, but the fact is not only that I actually started doing drugs again, but that I had to leave the institutions that coddled me. One of those institutions was a relationship, so I had to break up with my girlfriend, but the biggest one for me at the time was AA. I had to leave AA.

Because it is kind of like an addiction in itself?

Yeah a bit… It’s very fear-based. “If you do this one thing, it’s over. You’re done.” It’s actually so fear-based that I couldn’t live like that anymore, or I didn’t want to. And there were other things that I was trying to leave, too.

I was trying to separate myself from property… but that’s very difficult. (Laughs) I at least got rid of my cell phone for 9 months – or I lost it and decided not to get a new one I should say. And that was already very difficult. 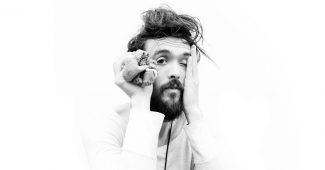 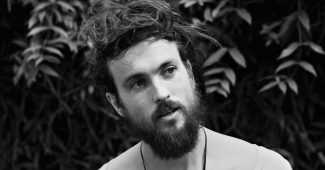 You managed to start a band without a cell phone?

If you locate yourself in the right spot, it is possible. Berlin would be a great place to have no cell phone, I think. Especially if you were able to live in a central location.

But you did it in L.A. – a city where that seems like it would be pretty tough.

In L.A. it’s very difficult, but I found a good place. It was literally on the corner of Hollywood and Sunset, where the two biggest streets in Hollywood meet. I had a little apartment right there, right next to a movie theater and I put a notepad and a pen out so people could come by and write me notes, but that’s all.

Yeah and if they wanted to see me they could always come by as well.

Do you feel like the music you make in Edward Sharpe is more true to yourself than before?

This is much less reactive, so I think that means that this is necessarily much more me. Ima Robot was me reacting to things; this is me trying to be productive. To sort of sound a bit hokey and put it into sort of new age terms, this is me trying to be involved in some sort of solution where the other was involved in some sort of destruction. So that’s sort of the big change.

Where does your solo project under your real name Alexander Ebert come into the picture?

It came more or less out of the same headspace. But pure Alexander Ebert stuff might have a bit more of the hip hop influence in it. Hip hop was definitely, far and away the primary influence for at least 10 years of my life. From about 7 or 8 on till about 15 or 16 that’s all I listened to.

How does a 7-year-old get into hip hop?

I saw a poster of Run–D.M.C. and you know what’s funny is that I didn’t even hear their music, I just knew that that was the shit. “Whatever that is, I know that that’s somehow rebellious.” And for me, I was a very, very rebellious person as a very little kid. I was constantly in trouble. Tagging and doing various wannabe sort of gangster activity, you know. It was my punk rock.

Yeah it is, man. For the better part of my life I was always trying to manufacture somehow what I would consider “living.” Because I grew up sort of upper-middle class and I didn’t relate so much to that as a life and I wanted to really find “living.” And when I ran track and field outside of school when I was about 10 or 11, I made friends with these inner-city kids – or at least they were tough to me – and I was just fascinated with them. They showed me N.W.A and Ice-T and the parties. It is hard for me to even imagine really, except that I know how much that I wanted to be older and be rugged and have hardship and have that look on my face like James Dean smoking a cigarette. Rough, sunburnt. (Laughs)

“I expected a lot of myself, so when I got caught up very heavily in drugs and wasted a lot of my time it was a big bummer for me.”

I thought very highly of myself, even though my school and my dad didn’t, regarding my mental abilities. I thought that I was pretty much a genius and I expected a lot of myself and so when I got caught up very heavily in drugs and wasted a lot of my time it was a big bummer and total let down for me. It was very sad, but at the same time I wanted to feel this sort of manufactured hardship. But then again I should go a little easier on myself… I had a sort of very hard time with the so-called human condition.

I’ve always had a major issue with death, from a pretty young age. From about 5 years old on I was very contemplative and started to become constantly filled with nostalgia for the present moment and the feeling that it’s always fleeting. And until I handled that I really didn’t have a healthy mind and it took a long, long time.

You seem to talk about that quite a bit in your lyrics.

Yes, in “Man On Fire” I might sing that I want the whole world to dance with me, but it’s over murder and pain and heartache and shame. All those qualities are in there. When I wrote that song I was really fucking pissed off. I was very upset with myself for not being more of a superhero.

Because I think human potential is so much farther beyond what we expose of ourselves, you know? And I feel like I was just coming up short constantly because of social anxiety, which is such bullshit. So I wrote that song as a “fuck you” to myself, to convince myself to really act and try to be free.

Shirley Manson: “I’m enough for me”

Nick Cave: “I don’t think that people want to be like me”