Albert Watson's retrospective photo exhibition is on display at Berlin's Camera Work Gallery until 18 January 2020.
Inspirational Conversations
Rolex is proud to support The Talks as they continue to feature inspirational conversations with the creative icons of our time.

Mr. Watson, after shooting over 100 Vogue covers throughout your career, does it still excite you to see your photograph on the front page of a magazine?

Now when people bring me things to sign, pages of American Vogue, or Italian Vogue, some of that is unfortunately less important once you go past 20 Vogue covers, 50 Vogue covers, 80, a hundred… Once you pass a hundred, of course it doesn't have the same magic as stopping in your car when you see the very first one, thinking, “Wow, I did that picture,” and you go up close to it and your name's on the side, you know, “Wow, my name is on it.” It’s not the same as when you wanted to stop somebody walking by and say, “I did that picture!”

Was that what it was like for your first Vogue cover?

Yes, I remember driving in New York in 1976 and I put the brakes on quickly — somebody almost ran onto the back of me — because there was the very, very first Vogue cover that I ever shot. Big, on a bus shelter! And I remember just pulling over and just staring at it. At that point it was a real dream to see one of your pictures there. I’d always dreamed of doing a Vogue cover! Now I'm slightly disappointed in myself because you do start to get a little bit blasé.

“Taking pictures is easy because I want it and I’m willing to work at it.”

Was there ever a time you were fed up with photography?

No, I’ve never, ever, ever in my life been fed up to take a picture! And in fact, I worked with a very good creative director on a very big job for eight days. And at the very end of day number five, he came to me and he said, “You know what I like about working with you? Even the very last shot at the end of a hard day, for you it almost seemed more important than the first shot of the day.” He said that very few people he’s worked with feel that way. I always think that was one of the best compliments that I’ve ever gotten. So to answer your question, no I've never had that yet. I mean, it may still happen… I just love taking pictures.

You’ve been shooting since the seventies, and before that you went to film school and worked as a graphic designer. Would you say that your background in film and design influences the way you look at photography?

Oh, absolutely. I had a lot of training, as you said, I went to film school and was a graphic designer before that. I got a Master's degree in film and a PhD; I’ve always been a student forever and ever and ever, I’m that kind of person you know. So the pictures are 100 percent graphic and 100% filmatic. I mean, there is no word in English language called filmatic but it of course suits my work. One aspect of graphics is that in some pictures there is sometimes, not always, a conceptual thinking behind the picture. It’s conceptual, it's an idea — but it's also graphically executed so it almost has the echo of a movie poster. I've done so many movie posters like Kill Bill, things like that, so the word is appropriate for those kind of usages, like a poster on a wall. So graphics and film for me are written all over the work.

Plus you’ve also directed a ton of television commercials.

Right, but I have to say that my wife never liked it when I did commercials. She would say, “You are born to be a photographer. It's so easy for you to take pictures.” But it's easy because I want it and I’m willing to work at it. When I would direct a TV commercial she thought it was a misuse of power, a misuse of my ability. However, to me, in communication and working and controlling a crew, I found it fascinating. I don’t regret it because what I learned as a director is that you are directing people. And it's not just as always as simple as, “Look to the left, look to the right.” It's much more complicated how you work with somebody and how you use your persona, your personality to work with the person in particular. 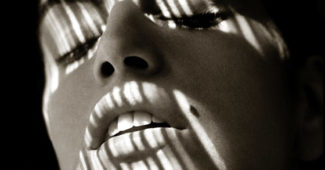 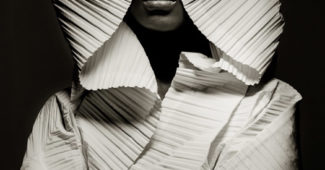 Those skills must have been especially useful when taking portraits.

How do you create that atmosphere?

I think it’s to feel that when they come in to the space that's in front of them, it just feels together. When I shot Joaquin Phoenix, he was nervous, but I sat down and had a cup of tea and just chatted with him for a while, and that helped him. When I did the pictures of Steve Jobs, the PR person came and said to me, “Steve hates photographers, I'm sorry to tell you that.” And I said, “Look, there's nothing I can do about that. I'm here to photograph him, I'll do the best I can.” I had an hour to shoot him but I ended up telling him that I only needed him for 10 minutes, which he was happy about. I think when he saw the mark on the floor, when he saw the way the lighting was done, the ambience, he understood that I knew what I was doing. I shot a Polaroid and he said, “Wow, maybe that's the best picture ever taken of me.”

And it’s become one of the most recognizable photos of the last 20 years.

Actually, Apple called me a couple years later asking me to send that photo right away — an hour later I got a notification on my phone and it just said: Steve Jobs died today, and there was the picture. So that was a very sad story but nice. It’s a simple photo, and they did end up using it after for his biography as well.

“I have this philosophy that if you're there to work, you never ever, ever get that day back.”

Is it easier to photograph someone that you get along with?

It's easier if you feel something with the person because as a photographer, you're trying to do something with the person. You're trying to build a rapport or have something where the person is enjoying having you there. If I'm taking your picture, you're enjoying having me take your picture, it shouldn’t be a miserable experience. Although when I photographed the musician Chuck Berry, he was a little difficult. I said, “There's no reason for you to treat me like this.” But he didn't care.

I guess it’s like in any other job — sometimes you work with people you aren’t necessarily compatible with.

Inspirational Conversations
Rolex is proud to support The Talks as they continue to feature inspirational conversations with the creative icons of our time.
Albert Watson's retrospective photo exhibition is on display at Berlin's Camera Work Gallery until 18 January 2020.
Life